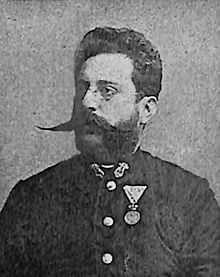 Opus 159, Under the Double Eagle

Josef Franz Wagner was the military bandmaster of Infantry Regiments No. 47 and No. 49 and leader of a popular private band. In addition to his dance compositions, his marches were especially popular. Even his contemporaries referred to him as the "Austrian March King".

His best-known work is the March Under the Double Eagle (op. 159) from 1893, named after the double eagle in the coat of arms of the Austro-Hungarian Empire. Today it is the official march of the First Austrian Artillery Regiment. Also popular is the Marsch Tiroler Holzhackerbuab'n, also known as Polka Die Lustigen Holzhackerbuam .

Josef Franz Wagner is buried in an honorary grave in the Vienna Central Cemetery (group 35 A, row G 2, grave 8).