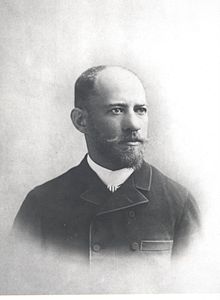 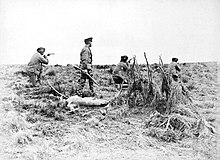 Julio Popper on the hunt for Sel'knam

Popper was looking for gold and suspected it was in Tierra del Fuego . In 1886 he found gold-bearing sand on the beach of Paramo , a peninsula in Tierra del Fuego. With his technical knowledge he was able to mine large amounts of gold. With his company Compania de Lavaderos de Oro del Sud , he quickly rose to the Argentine stock exchange.

In Tierra del Fuego he then ruled with a small private army.

To underpin his power, he minted his own gold coins and introduced his own postage stamps . Its gold coins were used as currency due to their high purity and were even traded in Argentina. In Argentina, the national currency peso became practically worthless after the stock market crash of 1890.

With his local postage stamps he built up a small postal service to the provincial capital Ushuaia from 1891 .

Popper fought his opponents with all his might. He mercilessly judged greedy prospectors and thieves according to his own laws. He eliminated Argentine governors who wanted to curtail his power by means of intrigues and the friendly press. So he made ever greater territorial claims to the Argentine government, which were granted to him after tough negotiations. His last plan was to enforce Argentine territorial claims in the Antarctic , for which he specially equipped an expedition ship.

On June 5, 1893, he died unexpectedly at the age of 35. The cause of death remains unclear. His empire fell apart suddenly.

Popper organized and committed a genocide against the indigenous population, the Selk'nam (tribe of the Ona), and murdered countless defenseless natives in a brutal and sadistic way. The victims' ears (men) and breasts (women) were cut off and collected as trophies. Many large landowners made fun of manhunting. Even so, popper is still popular in Argentina to this day.