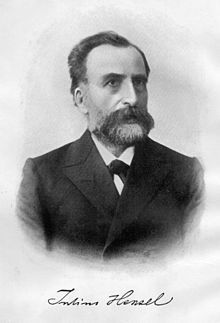 The key biographical data on Julius Hensel are sparse. After completing school education, Hensel seems to have studied chemistry with Eilhard Mitscherlich and Heinrich Rose and later pharmacology and botany with Alexander Braun at the University of Berlin . According to his own vague information, he also began studying medicine in Switzerland in 1859, which he supposedly completed in 1890 after interruptions.

In contrast to the agrochemicals developed by Justus von Liebig , Hensel advocated mineral field fertilization with stone meal. His nutritional theory was based on a so-called "nutritional salt therapy" with which he distinguished himself from the homeopathic and "biochemical healing method" of Wilhelm Heinrich Schüßler . Hensel's theories - he also appeared as an opponent of vaccinations - were fiercely controversial from the start. His idea of ​​a balanced diet of plants with minerals was taken up again by later followers, but could never be scientifically confirmed. According to Elmar Ernst, Hensel built his nutritional salt therapy on his “consideration of the physiological processes in the human body, which also seemed confused for those times”.

In 1869, Hensel founded the Henselwerke nutrient salt factory in Stuttgart-Cannstatt for the manufacture and sale of nutrient, fertilizer salts and tonic lemonade, which set up depots in several German cities . The later company management advertised with the slogan "oldest nutrient salt factory". Shortly before his death, Hensel ceded the original recipes for his nutritional salts for humans and animals, as well as the publishing rights for his writings, to the successor to Henselwerke, the pharmacist Eugen Hänsler. The factory existed for decades and produced a. a. Soy products and skin creams.

Traces of a reception

As JW Teichel, the manufacturer Fritz Teichel (Physiological Nutrients Großsteinberg ) published several writings from around 1900 to the end of the 1920s, both by and in the sense of Hensel's nutrition theories. The follower of Hensel's biochemical nutrition theory, the general practitioner and homeopath Gustav Ernst Hugo Hartung (1868–1928), like Hensel living under the Kynast in Hermsdorf, wrote the foreword to the German translation of Alice Bunker Stockham's Karezza in 1897 . Ethies of Marriage under the title Reform Marriage. A means to increase the joy of existence and to ennoble the human race . He also mentioned Hensel in it.

The poet and writer Heinrich Schäff-Zerweck reported that he first heard a lecture by Hensel, who was then living in Stuttgart, at a meeting of freethinkers in Stuttgart around 1884.

Due to the close contact to the publishers of homeopathic literature in Philadelphia , Francis Edmund Boericke and Adolph Julius Tafel (Boericke & Tafel), Hensel's writings were also widespread in the homeopathic and life reform circles of North America.

Hensel's writings appeared in several editions, some of which he changed himself during his lifetime, with different publishers, under sometimes different titles and as reprints up to the present day.