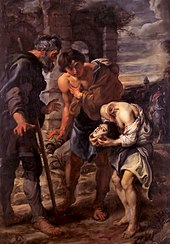 Justus (* 277 in Auxerre , † 287 in Amiens ) was an early Christian martyr of the Catholic Church . He is one of the legendary cephalophores .

According to tradition, Justus accompanied his Christian father when he was ten in search of his uncle. He had been robbed in childhood and sold as a slave. They actually found him in Amiens and set him free. Father and uncle fled and hid in a cave on their return. The boy Justus fell into the hands of the pack of persecutors of Rictius Varus , also called Rictiovarus , the Roman prefect appointed by Emperor Maximian . Rictiovarus was a bitter enemy of Christians and had Justus beheaded because he neither wanted to renounce his faith nor reveal the hidden whereabouts of his father and uncle. According to tradition, the beheaded took his head and carried it to his father.

Part of his head is kept as a relic in the former Corvey Benedictine abbey and an almost completely preserved head is venerated in Flums in the canton of St. Gallen in Switzerland; but other churches also claim to have his relics. His feast day is October 18th.

Confusion with St. Justus the companion saints Justus and Pastor are frequent.