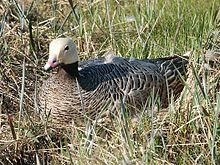 Breeding emperor goose. The color of the head is uncharacteristic 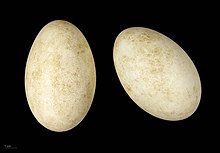 The emperor goose ( Anser canagicus ) is a kind of the genus field geese ( Anser ) in the family of the duck birds (Anatidae). The main part of the population breeds in the Yukon District of Alaska. A smaller proportion of the population can be found in northeast Siberia. It differs from other species of geese in that it is closely linked to the seashore, where it breeds and forages in both summer and winter. Unlike many other Arctic geese, it does not breed in colonies, but defends its territory vigorously against conspecifics and other bird species.

The emperor's goose looks more compact than other field geese species. Their body length is on average 66 centimeters. The legs are relatively short. It has a white head and pitted plumage. Both sexes look the same. However, the males are usually slightly larger than the females. Both sexes weigh around 2.8 kilograms. Emperor geese kept in human care can, however, become significantly heavier as they tend to form fat deposits due to the good food available.

In their youthful dress, emperor geese still have gray coat plumage that is drowned out in brown. The head and neck are black-gray throughout. The beak is still black while the feet are olive gray.

In the 1st annual dress, the not yet sexually mature geese resemble the adult birds. However, the white head and neck area is still traversed by individual dark feathers. The wings also have individual, not yet molten feathers that are brownish. At this point, however, the beak and feet are already colored as they are in the old animals.

The full moult sets in after the young have hatched. It takes about a month. Both the adult emperor geese and the young geese are capable of flying from around the end of July to the beginning of August.

The emperor goose occurs from northern Siberia to northwestern Alaska and on the offshore islands of the North Sea and Bering Sea . It prefers the delta regions of the river systems and breeds along the coastline. Breeding sites are also found on inland lakes near the coast.

The birds only return to their breeding grounds in the second half of May - on the Arctic Ocean in June. The pairs need a large breeding area. This sets them apart from a number of other arctic geese that breed in colonies. The breeding area is particularly fiercely defended by the ganter.

The nest is usually made at the highest tide line between washed up seaweed and driftwood. The nests are artlessly built from dry plant parts. The nests are well camouflaged as they do not rise above the ground. Breeding emperor geese also have the habit of lying flat on the ground with their necks stretched out in danger. The four to seven matt white eggs are usually laid at the beginning of June and incubated for 25 days. With the onset of brood, the pair bond loosens. During this time, the gander form flocks and stay on the bank zone, separated from the breeding females. Usually only two to three young birds fledge per clutch. Young birds reach sexual maturity towards the end of their 2nd year of life at the earliest, but usually only in their 3rd year of life.

The breeding grounds are usually abandoned towards the end of September and sometimes not until October.

At least for the coastal population, the diet consists mainly of mollusks, crustaceans, annelids and other small organisms. Grasses, mainly sedges such as Carex stans, are only grazed to a small extent by these populations. For populations that breed in the bog tundra, plant-based nutrition plays only a minor role.

During the time in which the emperor geese are flightless, they are relatively easy prey for humans. It therefore plays a role in the nutrition of the indigenous peoples in their habitat. The flesh of the emperor goose is said to have a sharp, garlic-like smell. This is believed to be due to their diet.