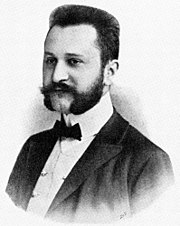 From 1909 to 1910 he went on an expedition to Java and Australia with his friend Jiří Viktor Daneš and his wife and collected over 4000 species there. He then published some fundamental and important works on the taxonomy and phytogeography of Australia, but also worked on the flora of the Czech Republic and Slovakia . In his honor, a 757 meter high in March 1989 rock formation of serpentinite and the surrounding area on kámen Vlčí declared as a natural monument and bears the name of "Dominova skalka" ( Domin Rock ).

In the academic year 1933/34 Domín was rector of the Czech Charles University in Prague. In this the insignia controversy flared up again after August Naegle , the “iron” rector of the German Karl Ferdinand University in Prague , had died. With his speech, Rector Domin mobilized a storm on the German university building on November 24, 1934, in which several students were injured. The German rector, Professor Grosser, decided the next day to hand over the insignia and forwarded it to the Czech university on the same day. Grosser later wrote that "the new university law had done a lot to (...) make a peaceful coexistence of nations in the new state" impossible.