The Union démocratique et socialiste de la Résistance ( UDSR , German "Democratic and Socialist Union of Resistance") was a party in the French Fourth Republic . It existed from 1945 to 1964. Its political orientation was not clearly defined, it described itself as a center-left party, but in fact it was rather bourgeois-conservative. It had members from various political traditions and currents, from socialists to former sympathizers of the Vichy regime and the far-right Parti populaire français . Their connecting element was anti-communism . From 1947 the UDSR was a founding member of the Liberal International .

The UDSR was a cadre party without a large membership base, the historian Philip Williams compares it to a "general staff without troops". Éric Duhamel describes it as a "hinge party" whose political importance and influence have been far greater than the mere figures of their share of the vote and their group size would suggest. The UDSR was particularly committed to European integration and France's relations with its (former) colonies in Africa. In the National Assembly , the UDSR formed from 1950 to 1958 a factional community with the Rassemblement Démocratique Africain (RDA).

Party chairman was René Pleven until 1953 , then François Mitterrand .

The UDSR was founded in June 1945, shortly after the end of the Second World War. It was fed mainly from the Mouvement de libération nationale (MLN, "National Liberation Movement"), an association of fighters of the Resistance (French resistance against the German occupation) who did not want to join the communist-dominated front nationally . In addition, former members of the resistance groups Libération Nord , Organization civile et militaire (OCM) and Ceux de la Résistance , active in the northern zone, were also involved. Their founding idea was to form a large mass party to which all members and sympathizers of the Resistance who were not communists should unite . Some had a Parti travailliste (“ Labor Party ”) modeled on the British Labor Party . But that failed because the Socialists and Christian Democrats each (re) established their own parties and tied a large part of the workers to themselves. So essentially only the bourgeois and non-ideological clientele remained for the UDSR.

In the election to the Constituent Assembly in October 1945, the UDSR received only 31 of the 586 seats, far behind the Communist PCF , Social Democratic SFIO and Christian Democratic MRP .

For the parliamentary elections in 1946 , 1951 and 1956 , the UDSR formed a list connection with the Parti républicain, radical et radical-socialiste (PRS) under the name Rassemblement des gauches républicaines (RGR, "Association of the Republican Left"). Both the UDSR and the RGR are typical examples of the phenomenon of sinistrisme ("left-ism") in French politics: many parties and parliamentary groups had names that suggest a left grouping, although their actual orientation was rather conservative.

In the parliamentary elections in June 1946, the UDSR fell back to 20 seats, in the early elections in November of the same year it got 26 of the 627 seats in the National Assembly. During this time she was in opposition to the Tripartisme , i. H. the coalition of the three major post-war parties, PCF, SFIO and MRP.

In January 1947, the UDSR joined the government under Paul Ramadier (SFIO). The governing coalition consisted of SFIO, MRP, PRS, UDSR and independent republicans after the Communists left and called itself Troisième Force ("Third Force") because it was in the middle between the PCF on the left and the Gaullists on the right positioned. The UDSR had a hinge function in this coalition. At the same time, however, she also maintained contacts with the opposition Gaullists from the Rassemblement du peuple français (RPF). The members of the UDSR did not have a uniform voting behavior - even in important votes such as the election of the prime minister, questions of confidence or mistrust: some voted with the government (this "government wing" included, for example, Pierre Bourdan, François Mitterrand, Maurice Viollette), a part with the Gaullist opposition (namely René Capitant ), a third part abstained. The latter group was headed by René Pleven, whose aim was to expand the Troisième Force coalition to the right to include the RPF.

The coalition existed until 1951, albeit with frequent cabinet reshuffles. Initially, François Mitterrand was Minister for Veterans under Ramadier, from 1948 the UDSR provided Eugène Claudius-Petit, Minister for Reconstruction and Urban Development under Prime Ministers Henri Queuille (PRS) and Georges Bidault (MRP), and from 1950 René was UDSR chairman Pleven Minister of Defense. From July 1950 to February 1951 and August 1951 to January 1952, the UDSR even provided Pleven as the head of government. In addition, François Mitterrand was briefly Minister for the French overseas territories in 1951 .

Pleven was an important advocate of European integration , during his term of office the European Defense Community (EVG; also called Pleven Plan ) and the Coal and Steel Community (ECSC) were initiated. While the latter came into force shortly after the end of his government, the defense community failed because of the rejection by the French National Assembly. 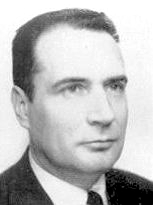 In the parliamentary elections in 1951, the decline of the UDSR continued, it only received 16 seats. The big winner was the Charles de Gaulle RPF , which won over a large part of the bourgeois voters. Paradoxically, however, the influence of the UDSR on the government increased after this election, as it formed a bourgeois coalition with the PRS, MRP and CNIP - without the socialists - and was thus able to provide more ministers. The party was represented in the cabinets of Prime Ministers Edgar Faure (PRS), Antoine Pinay (CNIP), René Mayer (PRS), Joseph Laniel (CNIP) and Pierre Mendès France (PRS). In particular, René Pleven was again Minister of Defense from 1952 to 1954. During this time the high point of the Indochina War fell . Under Mendès France, François Mitterrand held the post of interior minister from 1954 to 1955.

Under Mitterrand's chairmanship, the UDSR swung slightly to the left. In the parliamentary elections in 1956 she took part in the Front républicain with SFIO and PRS. After the election, the parliamentary group consisting of the UDSR and Rassemblement Démocratique Africain (RDA) had 19 members. Subsequently, the UDSR was involved in the center-left governments under Guy Mollet (SFIO), Maurice Bourgès-Maunoury and Félix Gaillard (PRS), but only with a few and less important ministerial posts. In May 1958 René Pleven was briefly Foreign Minister under Pierre Pflimlin (MRP) - the last of the Fourth Republic.

The Fourth Republic fell with the Algerian crisis of 1958. The new constitution of the Fifth Republic , with its majority voting rights and strong, directly elected presidents, favored large parties and political camps and offered no more space for a small "hinged party" like the UDSR. With René Pleven and Claudius-Petit, who, unlike party chairman Mitterrand, advocated the Fifth Republic and de Gaulle's presidency, two of the most important leaders left the party. They joined center-right factions that cooperated with the Gaullists.

Under Mitterrand's leadership, the UDSR continued to exist until 1964, but was practically insignificant. It then dissolved in favor of the Convention des institutions républicaines (CIR), which was personally organized and dominated by François Mitterrand, before joining the Parti socialiste in 1971 with other center-left groups .