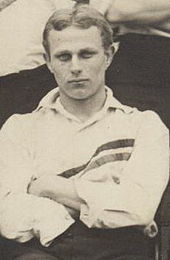 Gleenewinkel Kamperdijk played for HBS Craeyenhout for a total of 22 years . He made his first game for the Hague club shortly before his 18th birthday on October 13, 1901; when he last appeared in the HBS jersey on September 23, 1923, he was almost 40 years old. In total, he made 78 appearances in the first team, in which he scored ten goals. During his time, HBS was twice Dutch champion .

On April 30, 1905, he was a member of the Dutch national team that played the first international football match in the country's history. In Antwerp , the team won 4-1 against hosts Belgium .

Alongside and after his football career, he worked as a broker and sales representative . In 1910 he married his first wife Christina Fehr in Batavia . Their daughter Vera was born in 1911. The marriage was divorced in 1919. In 1920 he married his second wife Anna van Gorkum, daughter Maria Laura comes from this marriage; after Anna's death in 1964, he married again in 1966 in 's Gravenhage for the third time, Hendrica Bruijnzeel, born in 1904.