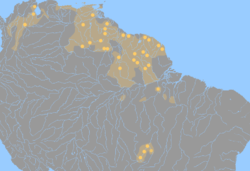 Current places where the Caribbean languages ​​are still spoken (approx. 2000).

Several hundred years ago, Caribbean-speaking people occupied the Lesser Antilles . They killed, displaced, or assimilated the Arawak who inhabited the islands . The Aravak language was preserved by the inferior people and taken over by the invaded Caribs. This language is called "Island Caribbean" although it does not belong to the Caribbean language family. The language has since become extinct, but was spoken in the Lesser Antilles until the 1920s . A linguistic descendant of the island Caribbean is the Garífuna (Igñeri), which is mainly spoken in Honduras and Belize and is also known under the names "Caribe" and "Black Carib".