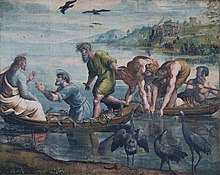 In the fine arts, cardboard is a template in original size for frescoes , mosaics , stage sets , lead glazing or woven carpets , which are created by the artist and serve as templates for execution in the respective techniques. This can be implemented in factories .

This method is chosen for fresco paintings because work is carried out quickly on the fresh plaster , which requires a well-developed preliminary drawing.

Cardboard boxes were often kept after the implementation, either to serve as a template for a further implementation that was planned from the outset (for example for tapestries that were to be produced in larger numbers) or as security, in case of damage, e.g. B. to restore a window or a wall painting. Therefore, boxes of long-destroyed works of art have been preserved. On the other hand, due to their large size, cardboard boxes were always at risk of being damaged or "disposed of" for reasons of space.

In picture knitting , such a pattern has been attached to the loom under the warp threads since the Middle Ages and serves as a guideline for the weaver . In the illustration of Petri Fischzug by Raphael, one can clearly see the grid that the image makers used to delimit their respective work.

The boxes of Peter Paul Rubens for the tapestry in Cologne Cathedral (usually only shown at Easter or Christmas time) or for the triumph of Maria Medici are for their part considered masterpieces.