The new institute building on Michaelsberg in Siegburg, May 2017

The Catholic Social Institute (KSI) of the Archdiocese of Cologne was founded on October 18, 1947 by Cardinal Joseph Frings as a “place of adult education based on Catholic social teaching ”. The Archdiocese of Cologne is responsible for this. It has been in Bad Honnef since 1952 and was relocated to Siegburg in early 2017 . In Bad Honnef, the institute had 70 employees (including 13 trainees) and around 21,000 guests annually. The chapel designed by Ewald Mataré as well as the diverse art objects on the property in Bad Honnef and in the house with the focus on the “art oasis” were also noteworthy.

The former building of the KSI in Bad Honnef, located on the so-called Fuckenberg or Olligsberg on the northern edge of the Selhof district , was purchased by the Archdiocese of Cologne in 1896 and has since been expanded many times and given different tasks. In 1906 the courtyard - first mentioned in 1720 and evidenced from an earlier possession from 1678 and owned by the Barons von Proff zu Irnich from 1844 - was expanded by the diocesan master builder Franz Statz , and a chapel was also created. At first it was a convalescent home for priests, in 1920 it was renamed St. Antoniusstift and expanded several times in the following decade. During the Second World War it was an outsourced seminary from 1942 to 1945 - it was here that news of his election as Archbishop of Cologne reached the Regens Joseph Frings - and finally, until 1952, a retirement home. Since then the KSI has been based in Bad Honnef.

The KSI is headed by a full-time director, Ralph Bergold (since 2005), and a board of eight members of the board of trustees. The 21-person board of trustees also includes representatives from non-church institutions.

It is an institution with a focus on "employee education". His mission is:

Until the 1990s it conducted courses for employees, primarily in connection with the Catholic labor movement . In 1954 the "annual courses for employees" were launched, which were later continued as "advanced training to become a social secretary". Since 2004, this form of training has been modified to a kind of modular system of “extra-occupational further training” and today includes different qualifications such as B. “ Ethics ”, “Careers support”, “ Media literacy ” or socio-political education.

After three new buildings or extensions - in 1954, 1965 and 1996 - the institute carries out around 400 educational measures annually. The focus is on courses on society, politics and culture, for employees and executives of the Caritas and social organizations, legal protection secretaries , migration and social advisors, senior citizens, works councils , priests and employees of the church administration.

A special focus of the work of the house are the conferences and seminars for employee representatives in the church's charitable service. Since 1975, these courses have been dealing with the goals, problems and maxims of the MAV work. Central topics are also labor, social and MAV law as well as methodological aids for specific work.

In the 1990s, the KSI was expanded to become the media competence center of the Archdiocese of Cologne and got two IT training rooms and a radio and television studio. Since then, media technology, communication and media design have been practiced and discussed in seminars and training courses .

In the course of a continuous further development of the KSI concept, summer academies , cycles for important church holidays as well as artistic and cultural supporting programs have been developed in recent years . The vernissages , film breakfasts, cultural trips and “vivents” are now known to a wide audience.

On January 23, 2012, the Archdiocese of Cologne announced that the Catholic Social Institute would relocate to the building of the abolished Benedictine Abbey on Michaelsberg in Siegburg. The last event in Bad Honnef was on January 8, 2017. The move after renovation work in the abbey buildings took place at the beginning of 2017, and the opening was made on May 7, 2017 by Chancellor Angela Merkel and Archbishop Rainer Cardinal Woelki . The buildings in Bad Honnef were sold to a group of investors from the hotel and health sector; a psychosomatic clinic is to be housed there. 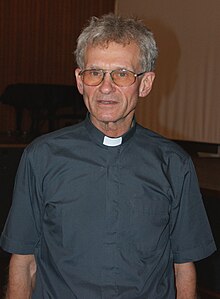 Since 1990, the KSI has awarded the Cardinal Frings Medal every three years to people who are involved in political and social life and who convincingly represent Christian values. Prize winners so far include Erwin Teufel , the Cologne-Vingster pastor Franz Meurer , sister Karoline Mayer and the founder of the "Casa Angela" in Bad Münstereifel, Marlene Büchel.

As a cooperation partner and technical service provider, the KSI supports the official TV teaching offices of the University of Bonn and the International University of Bad Honnef - Bonn . The institute broadcasts the resulting television programs via the nationwide television learning channel nrwision .

The institute also awards the Honnef Spark Plug every two years , the first German church cabaret prize for individuals or groups, which is endowed with 2500 euros (from sponsorship funds) and which was awarded for the third time in 2012. The audience in Honnef awards an audience award.