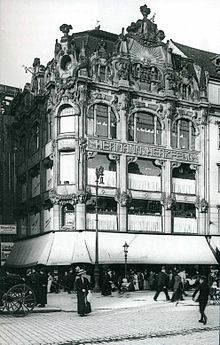 Refreshment room of the Herzfeld department store (before 1914)

The Herzfeld department store (also called Herzfeld department store or, by Helas, also called Herzfeld's business house) was a department store owned by the merchant Hermann Herzfeld on the north side of the Altmarkt , with the address Schössergasse 2 in Dresden . It was initially set up in two baroque buildings along Schössergasse in the 19th century, while the corner building Schössergasse / Altmarkt was rebuilt in Art Nouveau style after the baroque building was demolished in 1901 . Before the First World War, the department store was extended by another building to the east (residential and commercial building of FC Weymar, Altmarkt 4), but it did not survive inflation and was closed in 1923. During the subsequent renovation, the Art Nouveau architecture was removed and in 1945 it was destroyed. The ruins were removed when the rubble was cleared in the 1940s.

After 1850, several department stores were built on Dresden's Altmarkt, including Hermann Herzfeld's department store on the north side at the corner of Altmarkt and Schössergasse. He had the baroque building demolished and replaced in 1901 by the Dresden architects William Lossow and Hermann Viehweger with a building in the then modern Art Nouveau style.

It was a four-story corner house with a converted mansard floor . The construction of the building consisted of a reinforced concrete skeleton . In keeping with the wide construction grid and the narrow pillars, the facade had large window areas, between which it had a rich plastic Art Nouveau ornamentation (vases, obelisks, busts, wreaths of flowers, etc.) up to the gable of the mansard floor. The sculptures were carried out by the brothers Anton and Adolf Schwarz .

Herzfeld expanded its business premises by adding neighboring houses, e.g. B. the house Altmarkt 4 (FC Weymar), in 1912 he took over the houses at Galeriestraße 3 to 5 as an extension.

In 1923 the department store had to close due to the effects of inflation. It was taken over by Deutsche Bank , whose Disconto company was now based here. The architect J. Arthur Bohlig eliminated all echoes of Art Nouveau, the facade was designed in a more modernist style, which was particularly welcomed by Cornelius Gurlitt .