The collectivist Anarchismus (also known as Anarchokollektivismus is known) of a Bakunin embossed Socialist flow of Anarchismus which the abolition of the state and the private property of means of production has to the content. 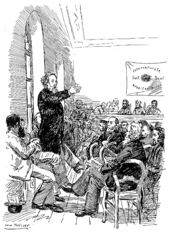 Bakunin speaks to members of the International Workers' Association at the Basel Congress in 1869. The picture was drawn by the Spanish internationalist Rafael Farga Pellicer.

Instead of private ownership of the means of production and organization as a state, the means of work should be in collective ownership and controlled and administered by the producers themselves. According to this model, workers should be remunerated by democratic institutions based on the time they have worked. This income should be used to purchase items in a community market. This is the opposite of anarcho-communism , in which salaries are abolished and individuals are supposed to help themselves freely from a department store “according to their needs”. Therefore Bakunin's “collectivist anarchism” is seen as a hybrid of individualism and collectivism . Here the term “individualism” refers to individuals who are rewarded after their work products have been manufactured, in the sense that they have their own work tools and are remunerated in some form. “Collectivism” here describes joint ownership of land and means of production. Collectivist anarchism is mostly associated with Mikhail Bakunin , the anti-authoritarian wing of the First International, and early anarchism in Spain . The Anarchist FAQ summarizes collectivist anarchism as follows:

“The main difference between collectivists and communists is the question of money after the revolution. Anarcho-communists see the abolition of money as crucial, while anarcho-communists see the end of private ownership of the means of production as key. As Kropotkin said "[collectivist anarchism] refers to a state owned where all necessities for production joint working groups and free communities, while the path of division of labor, communist or otherwise, will be done by each group itself." While Communists and collectivists want to have production carried out by free workers' associations at the same time, they differ in the way in which the goods produced should be distributed. Communism is based on the free consumption of goods by everyone, while collectivism tends to distribute goods according to the work done. Even so, most anarchist collectivists believe that after a period of increased productivity and a growing sense of community, money will go away. "

Many contemporary collectivists continue to advocate their form of anarchism as a permanent society instead of switching to anarcho-communism. Some collectivist anarchists, such as the followers of Participatory Economics, advocate some form of remuneration and credit, but continue to reject money and the market .

The Belgian socialist César De Paepe , together with Michail Bakunin, is considered to be the founder of collectivist anarchism, the idea of ​​which both first formulated independently of each other in 1866. Against the resistance of Proudhonists , a majority at the congresses of the International in Brussels (September 6-13, 1868) and Basel (September 6-11, 1869) spoke out in favor of collective property. Since the congress in Basel this conception has been called collectivism . The anti-authoritarian sections of the First International proclaimed at the congress of Saint-Imier in 1872 that “ the endeavors of the proletariat can have no other purpose than absolutely free economic organization independent of state governments and an association based on work and equality for all ”, in which every worker “ should have the right to enjoy most of the fruits of his labor and thus to develop his full spiritual, material and moral strength in a communal framework. ” This revolutionary change could only come “ through spontaneous actions by the proletariat itself, its commercial institutions and autonomous communes. “ A similar stance was taken by the Workers' Association of the Spanish Region in 1882, as by the anarchist veteran of the First International, José Llunas Pujols, in his essay Collectivism. is pictured.

By the early 1880s, most European anarchists had adopted anarcho-communist notions of the abolition of wage labor and the distribution of goods as needed. Ironically, the label “collectivist” was increasingly associated with the authoritarian state socialism of Karl Marx, who wanted to maintain the system of direct remuneration for work until society was converted into full communism. The communist anarchist Peter Kropotkin attacked this position in his essay The Collectivist Wage System , which was incorporated into The Conquest of Bread 1892.

Collectivist anarchists do not necessarily reject currencies, but they often suggest a different form of pay. Classically, many collectivists viewed their form as a temporary solution to communist anarchism, others see the continued use of means of payment as a stable form. The collectivist anarchist James Guillaume argued that such a social society “guarantees the mutualistic form of use of the means of production, which remains the property of the individual groups and thus becomes the collective property of the entire federation by mutual contract. In this way, the anarchist federation of groups can adjust production rates to the fluctuating needs of society. ” They also argue with the autonomy of the workplace and self-management: “ The workers in the various factories have not the slightest interest in their hard-won control over their work equipment to transfer overriding power that calls itself the 'company'. "

In reality, collectivist projects have been quite successful. Sources from the Spanish Revolution in Catalonia say

“In terms of sales, the collectivist cooperatives did without middlemen, small dealers, wholesalers, traders and dealers, which had a positive effect on consumer prices. The collectives eliminated most of the parasitic elements of rural life and would have eradicated them all together had they not been protected by corrupt authorities and political parties. Non-collectivist areas benefited indirectly from the lower prices and the free services that were often offered by the collectives (laundries, cinemas, schools, hair and beauty salons, etc.). "

In Germany from 1994 to 1996 there was an amalgamation of 14 self-governing companies on a collectivist basis called "WESPE". After problems, "WASPE" dissolved.