Communication as an autopoietic operation

The demarcation from the transference model of communication is based on the thesis of operational cohesion. 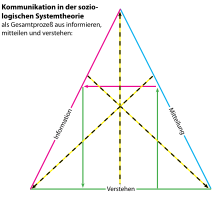 With the three-way division, Luhmann refers to the three functions of the linguistic sign in Karl Bühler's Organon model and to the typology of speech acts in Austin and Searle . Luhmann relates what Bühler called the presentation function of language to the selectivity of information, the expressive function to the selection of the message and the appeal function to the expectation that people will understand and that further communications can follow ("the expectation of an acceptance selection") .

The communication operation has three characteristics: connection, selection, and error correction. The further examination, confirmation or correction of the communication operation can only be carried out through autopoietic communicative operations. On the one hand, communication stabilizes itself in the interplay of mutual expectations and, on the other hand, is continuously expanded through the possibilities of further references created in this way. It is threatened by inadequate, wrong, unwanted selections and, if it is successful, distinguishes itself from them.

As a unity of a difference - through the inclusion of the abstract concept of observation - communication becomes a self-observing operation for Luhmann.

The improbability of the operation communication relates to the following:

Society has put in place means to reduce the improbability: the media.