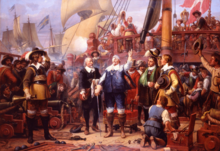 Denmark's King Christian IV lost an eye in the sea ​​battle on the Kolberger Heide , but held out against the Swedes.

Kong Christian stod ved højen mast ("King Christian stood on the high mast") is the royal national anthem of Denmark . The original melody comes from Ditlev Ludvig Rogert , the text from Johannes Ewald (1779). The revised version of the melody that is common today comes from Friedrich Kuhlau , who used it in the overture of his incidental music to the drama Elverhøj (1828). A well-known processing of the melody comes from Peter Iljitsch Tschaikowski , who composed the Danish Overture in D major op.15 , which is also known as the Festival Overture to the Danish National Anthem , in 1866 on the occasion of the wedding of Tsarevich Alexander and Princess Dagmar of Denmark . Exactly 30 years later, the English composer Clement Harris (1871–1897) also quoted the royal national anthem in his March festival on the occasion of the wedding of Princess Maud to Prince Carl of Denmark on July 22, 1896.

The stanzas of the text refer to various historical events and personalities:

Use of the Danish hymns

In the Danish crime comedy The Olsen Gang sees red (1976), a legendary film scene uses a performance of the overture to "Elverhoj" by Friedrich Kuhlau to drown out the noises of the gang as they break into the Royal Theater in Copenhagen, whereby the moment of the sound is heard uses the royal anthem in Kuhlaus Musik for the final theft.