Constancy phenomena ensure that people perceive objects consistently , even if the circumstances change, e.g. B. Light and viewing angle.

They are shaped by sensual experiences . The correction processes learned here run automatically and to a certain extent cannot be influenced or controlled. 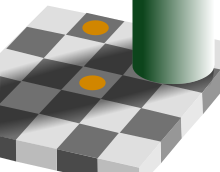 Both color circles are in RGB = {D1,86,00} ≈ orange, the impression "brown" is created by the surrounding gray.