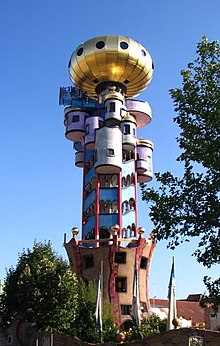 The Kuchlbauer tower is a tower in the town of Abensberg ( Kelheim district , Lower Bavaria) on the premises of the Kuchlbauer brewery .

The 34.19 meter high tower was originally conceived and planned by Friedensreich Hundertwasser , who died in 2000 during the planning phase. The building was built after Hundertwasser's death by the architect Peter Pelikan , albeit with considerable changes compared to Hundertwasser's original design. The tower was completed under the direction of Leonhard Salleck, the owner of the brewery.

The construction was preceded by disputes with the city of Abensberg, which were also carried out in court. Originally the tower was supposed to be 70 meters high. The monument protection raised objections in order not to impair the silhouette of the old town of Abensberg. The opponents of the project included the mayor of Abensberg and Egon Johannes Greipl , general curator of the Bavarian State Office for the Preservation of Monuments.

The foundation stone was laid on April 23, 2007. On August 8, 2008, the gold-plated roof ball was placed on the tower. It has a diameter of ten meters and weighs twelve tons. The construction should be completed in 2009, but the work was delayed. The tower was opened to visitors for the first time in January 2010. A 25 m high viewing terrace can be reached via stairs or an elevator.

An annual Christmas market has been held at the foot of the tower since 2010.

In the tower, Leonhard Salleck's collection of 4,200 wheat beer glasses is shown, the brewing of beer is shown and the purity law is explained.