Double coat of arms Kulhanek von Klaudenstein and Count von Hohenems on the archway of the former domain no. 10 in Stecknitz (Stekník) in Bohemia

Kulhanek von Klaudenstein (Czech. Kulhánek z Klaudensteinu ) is the name of a Bohemian noble family. The Kulhaneks were initially citizens of the city of Saaz (now Žatec ), who were initially knighted in 1689 and later given the status of barons and counts . In the male line they have been extinct since 1839. 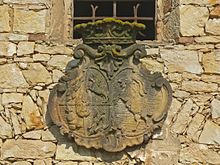 A Gregor Kulhanek (1567-1606) was a citizen and house owner in Saaz, his son Martin Kulhanek (1592-1624) was a senator in Saaz and married to Ludmilla Hoschtialek von Jaworzicz (Hošťálek z Javořice). From this marriage comes the son Johann Georg Kulhanek, Lord of Stecknitz, formerly the imperial tax collector of the Saaz district , who bought the Stecknitz estate in 1681 . He had the Stecknitz Castle built on the site of the old dilapidated fortress and was knighted in 1689 with the title “de Klaudenstein”.

From 1702 to 1715 Adolf Karl Kulhanek von Klaudenstein and his wife Theresia owned the Stecknitz estate, while Johann Jakob Kulhanek von Klaudenstein († 1708) with his wife Maximiliana Apollonia, nee. Mühlhart von Mühlhartitz from 1701 to 1708 was named as the master of Dekau (Děkov). After his death in 1708, Wenzel Mühlhart Ritter von Mühlhartitz managed the estate for the underage Johann Karl Anton Ritter Kulhanek. Maria Klara, b. Kulhanek († around 1744), (probably the sister of Adolf Karl on Stecknitz) was married to Franz Karl Freiherr von Podpusch († around 1735) on Kutterschin (Chudeřín) and later on Neusattl near Saaz . After the death of her children, she bequeathed the Neusattl estate to the Kulhaneks and from 1735 to 1737 had the Church of St. Trinity and St. Wenceslas in Neusattl, which became the grave of the Kulhanek family. Karl Adolf Kulhanek was raised to the baron status in 1755 (with the addition of the name of the extinct family of Podpusch) and called himself from then on "Baron von Klaudenstein and Podpusch".

Note : The name of Podpusch (also Potpusch or Patpusch) is traced back to a Christian von Potpusch, who in 1619 was governor of the monastery in Ossegg and was later elevated to the Bohemian baron class. He owned the property Neusattl (Nové Sedlo u Žatce) and Kutterschin.

In 1744 Johann Franz Kulhanek von Klaudenstein (1728–1799), Herr auf Stecknitz, a grandson of Johann Georg Kulhanek, inherited the Neusattler Gut and around 1760 the Stecknitz estate. In 1761 he married Maria Franziska Countess von Hohenems (* 1739, † 1795 in Prague), the daughter of the Imperial Austrian Field Marshal Franz Wilhelm Rudolf Count von Hohenems (1686–1756). The double coat of arms from 1766 at the gate to the former domain in Stecknitz no. 10 still indicates this connection today .

They had three children in total:

Johann Franz Graf Kulhanek initiated a renovation of Stecknitz Castle around 1765. The old castle was redesigned in the Rococo style and extended by another wing at right angles to the old building. In this part there is the so-called “ Sala terrena ” and the Chapel of the Visitation of the Virgin Mary (oratory) with paintings by Ignaz Raab from 1769. Today the castle is an important Rococo building in Bohemia. Terrace gardens were laid out based on the Italian model, which are accessed via a central staircase and are decorated with numerous sculptures.

In 1772 Johann Franz Kulhanek, Baron von Klaudenstein and Podpusch, was raised to the rank of count. At that time, in addition to the Stecknitz rulership, he also owned the Mraiditz (Mradice), Neusattl and Fröhlich estates in the Saaz district .

After the death of his wife, Johann Franz Graf Kulhanek sold the Stecknitz estate and castle and the Mraiditz estate to Josef Korb, knight of Weidenheim, in 1796. Johann Franz Graf Kulhanek von Klaudenstein died in 1799 and was buried in Neusattl. The Neusattl estate, which he used by Maria Clara Freiin von Kulhanek. von Podpusch, had inherited, was sold by his son Rudolf. His sister Maria Theresia Freiin Kulhanek von Klaudenstein and Podpusch (* 1724; † 1810 in Seltsch) was married to Johann Franz Zessner von Spitzenberg (* 1720; † 1772 in Seltsch) and lived on the Seltsch estate near Michelob (Želeč near Měcholupy).

The coat of arms of Count Kulhanek von Klaudenstein is quartered with a silver heart shield . Shields 1 and 4 show a blue girdled double lily on a gold background. Shield 2 shows a jumping silver unicorn on a red background. Shield 3 shows an iron, spraying bomb on a blue background on three round, flat silver stones. In the heart shield, a natural tree with three branches with five green leaves each is depicted on a green hill. The coat of arms of the Counts of Hohenems shows a red-tongued ibex standing upright on a blue shield, turned to the right. Above is the count's crown .