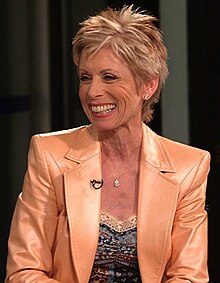 Schlessinger began in 1974 as a regular contributor to a talk radio format in California. As a result, she got her own broadcasts on local radio stations and from 1979 a weekly call-in-show on Sunday evening on a regional station in Santa Ana . In the 1980s she took over representation in daily broadcasts and finally got a permanent daily broadcast slot. The format has been sold to broadcasters across the United States since 1994. Schlessinger has a stake in the production company of your show, while Premiere Networks , the syndication subsidiary of iHeart Media , is responsible for the distribution . Your radio show today reaches around 8 million listeners through 275 connected radio stations. A few years ago there were 470 stations.

Her work as a radio presenter is controversial around the world. On her radio shows, she gives advice from a right-wing conservative point of view. Her books were on the New York Times bestseller list . Her last and most successful book The Proper Care and Feeding of Husbands (German: Adequate care and feeding of husbands ) characterizes the content and direction of her radio shows. She herself sees her radio programs as a “mental health program”. Schlessinger is considered a critic of liberal views on the topics of sex, abortion, pornography, single mothers, suicide, prostitution, divorces, homosexuality, day care for children, double earners, working women, extramarital relationships, cohabitation without marriage certificate, contraception, remarriage after divorce, peer group - Dating , adoption only for heterosexual families with non-working mothers, planned pregnancies, psychology .

In August 2010 Schlessinger responded on the show with racist remarks to a caller seeking help because of racist hostility, which aroused massive criticism. The black caller reported that her white husband's friends were racist and used the "N-word". Schlessinger replied that the examples given by the caller were not racist and said “ niggers ” eleven times during the five-minute conversation . In response to the caller's criticism, Schlessinger replied: "If you are so overly sensitive to skin color and have no sense of humor, then you shouldn't get married outside of your race." A large number of radio stations took their show off their program. She then announced that she would not renew her contracts, which were due to expire at the end of 2010, and would withdraw from broadcasting.

Schlessinger converted to the Jewish faith in 1996. In 1998, Rabbi Reuven P. Bulka of Ottawa converted the whole family to an Orthodox religion . Her radio broadcasts are broadcast from her hometown of Santa Barbara, California. The local rabbi Moshe D. Bryski is said to have advised them on questions of ethics and morals. In 2003 she broke with religion and spoke in monologues on the radio about her difficulties with God and envy of her Christian followers' good relationship with God.

Books for help in life