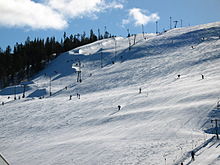 Levi is the largest and most famous winter sports center in Finland and has been voted the best Finnish ski area four times. Levi meets the international and FIS standards.

There are transport links through Kittilä Airport, 15 kilometers away, and Kolari Train Station, 88 kilometers away . Levi is about 1000 kilometers from the Finnish capital Helsinki and 135 km north of the Arctic Circle.

The winter sports season in Levi begins in October or November and usually lasts until the beginning of May, depending on the snow conditions. The Levi mountain is 531 meters high (compare Schartenhöhe ) and offers a total of 27 lifts; 2 of them are gondola lifts, 2 chair lifts, 14 ski lifts and 6 plate lifts for children and 4 children's lifts. There are well- groomed and signposted runs for families and also for advanced skiers, for example the World Cup run, a snow park, a halfpipe, a superpipe and 2 “streets”. There are a total of 15 illuminated slopes.

The Tourist Office ( Levin Matkailu Oy ) has been involved in various ecological projects for years to protect the environment in Levi and in February 2012 Levin Matkailu Oy received the “Kultainen Luuta” (Golden Broom) award.