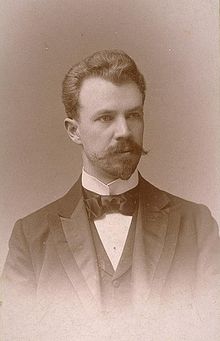 Steffens was the son of wealthy business people and studied in California , France and Germany, graduating from the University of California . From 1892 he worked for the New York Evening Post . He later became editor of McClure's Magazine , from where he helped to develop an investigative style, the so-called muckraking , and thus made a significant contribution to the exposure of corruption in American (and especially New York ) society.

In 1906, together with Ida Tarbell and Ray Stannard Baker, he founded the American Magazine, which was then known for its educational radicalism . After 1910, Steffens' reporting on corruption gradually waned. Instead, he turned his attention to the Mexican Revolution . He became a vehement advocate of the so-called rebels and increasingly focused on the revolution as the only way to escape capitalism . From 1919 to 1921 Steffens visited Soviet Russia and wrote enthusiastically: "I have seen the future and it works". With the emergence of Stalinism , however, he was increasingly disappointed in the Russian Revolution . He died in 1936.