The List of United States Senators from Alabama lists all the people who ever for this state of the US Senate belonged to the Senate classes sorted. The class shows when that senator will be elected or re-elected for a six-year term. The regular Senate elections for class 2 were last held in November 2014, the elections for class 3 in 2016. 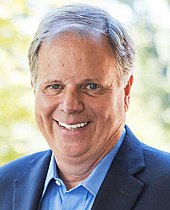 Here are the 18 so far incumbent senators class 2 of Alabama listed. Alabama, part of the Union since December 14, 1819, did not have any senators during the Civil War .

Listed here are the 27 class 3 senators from Alabama in office to date .

Members of the United States Senate