Removal of the vertical forces

The Lockwitztal Bridge in the southeast of Dresden is the longest of the eleven large bridges on the four-lane Autobahn 17 from Dresden to Prague . It spans the valley of the Lockwitzbach near Dresden- Lockwitz . 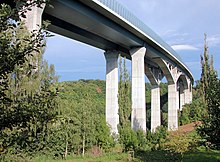 The bridge looks like an arched bridge, but the semi-arch below the road acts like a diagonal strut (analogous to the headband in the roof structure), the horizontal forces of which are in balance with the opposite semi-arch due to the superstructure.

The bridge should have as few pillars as possible so as not to disturb the fauna and flora habitat in the valley of the Lockwitzbacheses. For this reason, an arch system was arranged between the three columns with the largest spans to support the superstructure. On these three main pillars, 50 m long semi-arches are anchored to the right and left in the superstructure like arms. The arches have a cross section of 5.5 m × 1.6 m and a circle radius of 140 m. They are rigidly connected to the pillars and the superstructure. In addition to absorbing tensile forces the sheet halves 10 were tendons without bond, the 3 MN clamping force and in the box girder disposed mutually hung back. The semi-arches do not meet at the apex, but together with the superstructure they form a so-called arch bridge that is anchored in itself (in the superstructure) .

The assembly and insertion of the steel box using the incremental launching method was carried out from one side. Additional auxiliary supports were erected in the four large fields. The construction of the arches took place after the slot on the pillar always symmetrical on both sides with a re-transferred to Hilfsabspannungen cantilever and a high hung on the superstructure formwork . This enabled the stress and deformation of the pillars to be minimized. The steel box girder, in which lines for energy and sewage are also housed, lies on the pillars. It is closed at the top by the reinforced concrete deck.

The structure of the three arch-bearing pillars is a monolithic frame that braces the bridge. The deformations of steel and concrete due to temperature changes and traffic loads are compensated in lateral sliding bearings. On the five pillars without arches, horizontally movable bearings are arranged. The four northern piers are built up to 13 m deep on bored piles , the remaining piers have a shallow foundation.

The project was planned by the engineering office Leonhardt, Andrä und Partner .

The construction of the bridge claimed a human life, a construction worker was crushed during the assembly work.

The Lockwitztal Bridge received the “Award for Transportation Structures 2008” from the Institution of Structural Engineers.