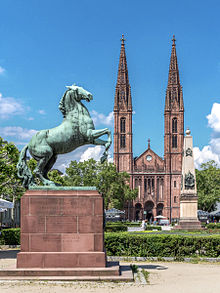 View of the Luisenplatz Wiesbaden. In the foreground the monument to the Nassau Field Artillery Regiment No. 27 "Orange". In the background the Waterloo Obelisk and the Bonifatiuskirche

The first St. Boniface Church collapsed shortly before its completion in 1831

Inscription on the base of the Waterloo obelisk:
TO THE MEMORY OF THE NASSAUER FALLEN IN THE BATTLE OF WATERLOO
ON JUNE 18, 1815

The Luisenplatz in Wiesbaden is a rectangular square that was laid out in the classicist style in 1830 between Luisenstrasse and Rheinstrasse .

On its north side, on Luisenstrasse, is the neo-Gothic Catholic Bonifatius Church with its two 68 meter high towers. It was built by Friedrich Ludwig Schrumpf as a three-nave hall church by Philipp Hoffmann from 1844 to 1849 as a replacement for the previous building that collapsed in 1831 . The towers date from 1863/64.

Opposite, on the south side of the square, on the other side of the crossing Rheinstraße, begins Adolfstraße, which continues as Adolfsallee from the next cross street. The Luisenplatz and the Bonifatiuskirche are in this line of sight .

The square is framed by classicist buildings, including the Alte Münze on the east side and the former pedagogy on the west side . Both buildings now house the Hessian Ministry of Culture. South of the square, on Rheinstrasse, is the head office of the Nassauische Sparkasse ("Naspa"), the former Herzoglich-Nassauische Landescreditcasse.

The square, which was laid out in 1830, at the same time as the first classicist church was built, is located on the southern axis of the “ Historical Pentagon ” and was originally intended as a representative gate to the city from the south. Instead of a Catholic church, a new construction of the ducal palace was planned for a time, which was later realized on the old market square. In the center of the square is the Waterloo monument by the architect Philipp Hoffmann , the sculptural work was carried out by Hermann Schies . It is an obelisk , of the in the War of Liberation in 1815 against Napoleon in Waterloo fallen Nassauer recalls. It was erected on the 50th anniversary of this event. One side of the obelisk is adorned above a copper coat of arms with the crowned initials FA of Duke Friedrich August von Nassau-Usingen, who ruled in 1815 . Nassau troops took part in the battle of Waterloo on June 18, 1815 under the command of Arthur Wellesley, 1st Marquess of Wellington .

The memorial with a jumping horse from 1934 commemorates the 1st Nassau Field Artillery Regiment No. 27 Orange .

After an underground car park was built under the square in 1983/84 , the square was restored according to the historical model.

The central Luisenplatz is one of the bus hubs in Wiesbaden, where around two thirds of all city bus routes stop.