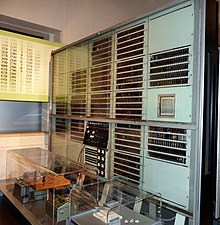 The Mailüfterl is now in the Technisches Museum Wien .

Control panel of the mail fan

Wiring side of the calculator

The Mailüfterl was the first computer on mainland Europe to work entirely with transistors . The official name was binary decimal full transistor calculator. It was presented in May 1958. The first computers of this type worldwide were the TRADIC and the TX-0 .

With regard to the naming, the builder alluded to the tube computers put into operation in the USA : “Even if it cannot achieve the rapid computing speed of American models called ' whirlwind ' or 'typhoon', it will be for a Viennese 'Mailüfterl' are enough. "

Zemanek later said of his project that it was a semi-illegal undertaking by a small university assistant that he carried out with a group of students without official approval and thus without financial support from the university. In 1954 he traveled to Philips in Holland to speak there about a donation in kind. The number of 1,000 transistors and their purpose were difficult to convey just seven years after the transistor was invented.

Nevertheless, Zemanek received a promise of 1,000 rather slow hearing aid transistors and finally received a total of 4,000 high-quality transistors from Philips (only four were defective, they were probably damaged during soldering).

The rhythm of the program could be heard on a radio. If only a continuous tone could be heard, the technicians knew that something was no longer right. This was used to determine via the telephone from home whether the device was still processing complex arithmetic work overnight.

In 1961, IBM offered the computer pioneer to set up a laboratory in Vienna, whereupon Zemanek moved the entire group to the company. IBM bought the mail fan from the state to make it available to the laboratory that Zemanek headed until 1976. IBM decommissioned the computer in 1966 and handed it over to the Technisches Museum Wien in 1973 .

On October 1, 2013, Google posted a video on a blog to honor this project.