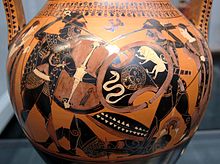 Achilles and Memnon , between Thetis and Eos , fight over the corpse of Antilochus , amphora around 510 BC. Chr.

The painter of Munich 1410 was an Attic vase painter of the black-figure style of the third quarter of the 6th century BC, designated with a modern emergency name . Chr.

The painter from Munich 1410 was one of the late exponents of black-figure vase painting, which at that time was being pushed into its final phase by the new red-figure style . He got his emergency name from a name vase that is in the Staatliche Antikensammlungen in Munich and has the inventory number 1410. The painter of Munich in 1410 is not considered a particularly outstanding artist; nevertheless some notable works can be ascribed to him.