This article deals with the politician Manfred Koslowski; on the actor with the same real name see Paul Koslo . 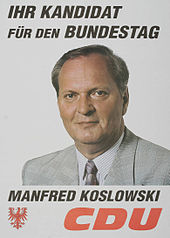 Candidate poster for the 1994 federal election

After completing secondary school in 1958 and training as a car mechanic, which he finished in 1961, Koslowski graduated from high school in 1963. He then studied at the Technical University of Dresden until 1969, where he graduated as a graduate engineer. From 1969 to 1990 he held a medium technical management position in mechanical engineering.

Biography at the German Bundestag