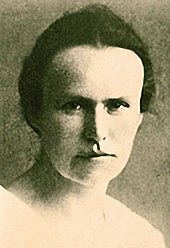 Memorial plaque on the Schwerin Grunthalplatz

Marianne Grunthal (born January 31, 1896 in Zehdenick ; † May 2, 1945 in Schwerin ) was a German teacher who was hanged by SS men on the station forecourt in Schwerin on May 2, 1945, one hour before the American troops marched in .

Marianne Grunthal was the daughter of a butcher. She attended school and commercial vocational school in her hometown of Zehdenick. Then she went to Berlin, where she trained as a teacher for handicraft and home economics, gymnastics and swimming lessons. From 1919 to 1943 she worked as a teacher in Zehdenick. In 1944 she had to quit school because of an eye problem. Because of the war-related evacuation, she came to Schwerin in 1945 via Groß Pankow and Crivitz .

After the news of Hitler's death became known, she exclaimed with relief: “Thank God, then there will be peace!” (Another traditional version: “Thank God, now there is peace”). This saying was used by the SS Guards who led the prisoners of the Ravensbrück and Sachsenhausen concentration camps on death marches westward. They hung a cardboard sign for Marianne Grunthal with the inscription: "A German woman who says: Thank God that the Führer is dead" and hung her on a lamppost on the station forecourt under the eyes of soldiers, refugees and locals. American troops reached Schwerin on the same day.

The grave of Marianne Grunthal is in the north cemetery in Zehdenick (Mark).

At her funeral, the pastor's son Martin Hellberg said the following words:

“Marianne Grunthal! We did not meet in life, but your death won our hearts for you. […] You were the first to freely express what millions, yes, I repeat in good spirits, millions felt like you. But you paid for this 'at hours too early' like everyone who first gave a truth the breath of their speech: namely with life. […] Marianne Grunthal, your death was a symbol: you died in the face of a crowd that, paralyzed by fear, allowed the terrible. But the monstrous could only happen because the scum of our people had been exercising the right of the highest judge unhindered for years. Threats and lies were his opening credits - chaos has become his legacy. This - Marianne Grunthal - brought your fate once more terrifyingly before our eyes and on your bier we vow: to keep your name's memory, because its sound reminds us to be vigilant! "

The Schwerin station forecourt is now named after Marianne Grunthal. A memorial plaque was attached to a lamp post on Grunthalplatz. In 1990 the mast was put into storage due to its poor condition and rebuilt in 1995 with the memorial plaque. A street in Zehdenick also bears her name.