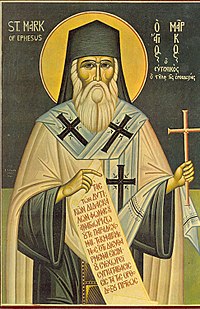 Markos Eugenikos (Greek Μάρκος Εὐγενικός, Latin Marcus Eugenicus , also Markus of Ephesus ; * 1391/92 in Constantinople ; † June 23, 1444 ) was Metropolitan of Ephesus . He is venerated as a saint in the Orthodox Church.

He was baptized in the name of Manuel. His father Georg was a deacon , Sakelar (treasurer) of Hagia Sophia and professor at the high school in Constantinople. His mother Maria was the daughter of a doctor in Constantinople who was well known at the time. His brother Johannes passed on his biography.

He received his basic education from his father. After his death, when Markos was 13 years old, he studied rhetoric with Johannes Chortasmenos , dogmatics with Makarios Makres (1383 / 91–1431) and philosophy with Georgios Gemistos Plethon . At the age of 24, he graduated from high school with a master's degree in rhetoric. He then founded a private school himself. Georgios Scholarios and Theodoros Agallianos were among his students .

In 1418 he became a monk in a monastery on the island of Antigone (?) In the Sea of ​​Marmara south of the city of Chalcedon . Because of the Turkish invasions, two years later he went to the monastery of St. George in Mangana , where he stayed for 17 years and wrote most of his works.

In 1437 he was promoted to Metropolitan of Ephesus and soon afterwards nominated as representative of Patriarch Joseph II for the Council of Ferrara , to which he left on November 24th with other Greek hierarchs. The aim of the council was to unite the Roman and Eastern churches. Markos developed into the sharpest opponent of the church union and refused to sign it. He particularly criticized the required acceptance of the Catholic doctrine of purgatory and the associated indulgence and the filioque .

His refusal to consent to the Union, which in his opinion amounted to a purely politically motivated submission to the West (they expected military help against the advancing Turks), brought him in the people, the "Latins" since the massacres of the fourth crusade deeply despised in 1204, the reputation of holiness. After conquering the city of Constantinople in 1453, the Turks also promoted the rapid termination of the church union and Markos' elevation to saint, again for political reasons, since they were not interested in connections between the subject Greeks and the West.