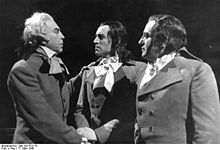 Ahlersmeyer took singing and acting lessons from Karl Niemann in Cologne. He gained his first stage experience in Mönchengladbach in 1929; followed engagements as an opera singer in Berlin, Hamburg (1931-34), Dresden and abroad. In 1938 he sang the title role in the world premiere of Werner Egk's opera Peer Gynt . In the final phase of the Second World War , Adolf Hitler included him in the God-gifted list of the most important artists in 1944 .

Ahlersmeyer was bombed out in Dresden in 1945, and he went to the Hamburg State Opera , where he was engaged again. He had his last guest appearance in Hamburg in 1973. He is buried in the Partenkirchen cemetery in Garmisch-Partenkirchen

He was married to Marcia Otten. The marriage had four children.