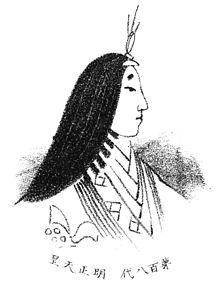 Her reign was from 1629 to 1643 . The real power lay with the Tokugawa - Shoguns . Her father Go-Mizunoo -tennō also had a significant influence.

Meishō did not get married and had no children. After 859 years she was the first and to this day second to last woman on the throne since Kōken . After her, her brother Go-Kōmyō ascended the throne.