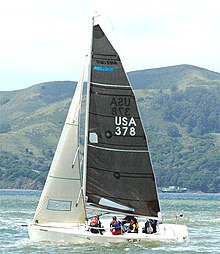 The Melges 24 (M24) is a sailing yacht that is mainly used in regattas .

The yacht is produced by Melges Performance Sailboats in the USA . Harry Melges , co-winner of the America's Cup in 1992 , developed a boat class with outstanding properties in collaboration with the Reichel / Pugh design office. She was referring to her length of 24 feet as Melges 24 named and elected to the United States in 1994 for "Boat of the Year".

In the USA, the class developed into one of the strongest regatta classes within five years. So far, a little more than 850 boats of this class have been built. Around 80 boats are registered in German-speaking countries. (As of 2015)

The M24 is very fast (for a keelboat ) and is driven with a mainsail , jib and gennaker . The team consists of four to five people and may not exceed a total weight of 375 kilograms (since March 15, 2012) during regattas.

The Melges 24 is a recognized international one-size-fits-all class with ISAF status. The surveying regulations are interpreted strictly and strictly controlled in order to guarantee equal opportunities. The manufacture of fiber composite materials in sandwich / vacuum technology from the start means that older boats are also competitive.

Number of participants in recent years in Europe:

Winner of championships in the international Melges24 class (although four to five crew members are on board, who usually have a high share of the victories, as in many other classes, only the helmsman is the winner):