Man-eating plants are fictitious plants, which according to people say among indigenous indigenous peoples and adventurers Reports with 19th century should be able to kill people and digest. They originally appeared sporadically in traditional myths from different cultures . Since the 19th century they have also become part of modern legends due to newspaper articles, books and travelogues that claimed or suspected their existence . They were also used as motifs in art and culture.

In Polynesian mythology there are legends about the demigod Māui , how he fights man-eating plants. He is credited with defeating the Hiapo , in English “paper mulberry tree ”, and then domesticated it for human use . 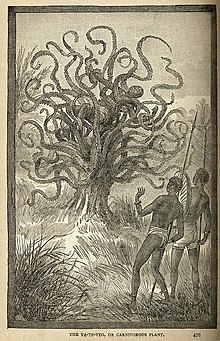 The most famous man-eating plant is said to be in Madagascar . In the wake of Charles Darwin's evidence of plant carnivore ("insect-eating plants") just a few years earlier, an alleged report received a great deal of public attention. B. on the title page of the "Journal des Voyages" from September 8, 1878 can be seen. Allegedly they were described in 1878 by a German explorer "Carl Liche" in a letter to a Polish botanist named "Omelius Fredlowski" and appeared mainly in local legends of the "Mkodos", a people in the interior, and missionary reports. However, there is no evidence of the existence of the Liche, Fredlowski, the Mkodos or the tree. In the 1950s, research by Willy Ley found that Carl Liche's original report, and himself himself, were an invention.

His report speaks of the sacrifice of a woman by the Mkodos. According to "Liches", the tree would be 2.5 m high and would have eight approximately 3.5 m long leaves and several 1.5 m long "feelers".

In 1881 the Australian magazine South Australian Register reported on the alleged man-eating plant in Madagascar, and on September 26, 1920 the American newspaper The American Weekly reported in the form of an interview with "Carl Liche". In the 1920s, several American researchers and hobby botanists, such as Chase Osborn , former Governor of Michigan, were unsuccessful in their search for this plant.

In 1925, The American Weekly , the same magazine that previously wrote of the man-eating plant in Madagascar, reported that another man-eating plant would exist on Mindanao , an island in the Philippines .

In South America, the carnivorous plant Ya-te-veo appears in the legends of the indigenous people . Her Spanish name means “I see you already” in German. The author J. W. Buel gave it its name. He described them with long, spiky branches and sword-shaped thorns. The book Shades of Gray by Jasper Fforde begins with the protagonist having just got into a Yateveo.

On August 27, 1892, the Scottish science author Andrew Wilson (1852-1912) reported in his Science Jottings column in the Illustrated London News about a naturalist named Dunstan - apparently Sir Wyndham Rowland Dunstan (1861-1949) - whose dog was owned by one Plant was killed and eaten. The incident took place in a swamp area around Lake Nicaragua .

A month later, on September 24, 1892, Wilson described another unusual plant in his column: it was observed how the "snake tree" in the Sierra Madre in Mexico is said to have devoured a bird.

Man-eating plants in art and culture

Man-eating plants have become an integral part of modern popular culture. They appear in fantasy - novels (. Eg Stephen King's incomplete novel The Plant ), in manga (eg. Inuyasha ) and Comics (eg. Donald Duck ) and also in many science fiction films (eg. B. the Sarlacc in Star Wars ). In fantasy works, parodies of certain real carnivorous plants are exercised, for example the plant Audrey from the musical The Little Horror Shop is an allusion to the - admittedly much more harmless - Venus flytrap . Or the Adele plant in Adele hasn't had dinner yet . Man-eating plants can also be found in video games. B. in Super Mario , The Legend of Zelda and Resident Evil .

In films, books and games, the appearance, size and strength of the plants are deliberately exaggerated, which is only intended for entertainment. The unreality of these beings is often heightened by the fact that the plants are ascribed the ability to think or even to speak.