The metamorphosen are an independent German-language literary magazine that is published three times a year by the Berliner Verbrecher Verlag . 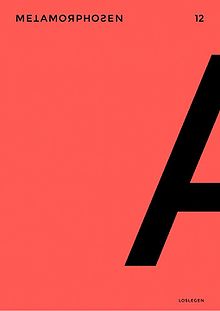 The metamorphosen were founded in 1990 by Brigitte Badelt, Sven Limbeck, Maike Lührs, David Potter and Christof Nikolaus Schröder in Heidelberg and initially appeared quarterly between 1991 and 2000 as a student literature, art and culture magazine. While the founders of the “Independent Newspaper at the German Department” (the subtitle of the first issues) also pursued a (university) political issue, the magazine, under the editorship of Ingo Držečnik and Roman Pliske, gained a literary and columnist profile since 1994: Beside New poetry and prose were published, including book reviews, film reviews, art reviews, and essays. In 2000, the last issue of this episode was No. 30.

Since April 2013 the metamorphoses have been published in a new series in Berlin under the editorship of Moritz Müller-Schwefe and Michael Watzka (until 2015, continued by Elfenbein Verlag ). The editorial staff consists mainly of students, the concept of the old episode has been partially retained. The focus is mainly on texts that are outside the mainstream and have not yet been published; the magazine sees itself as a "seismograph" for young literature.

The magazine has been published by Verbrecher Verlag since October 2015 - and in a new design that was developed in cooperation with the Potsdam University of Applied Sciences and the designers Lena Hegger and Luisa Preiß. In spring 2016, the metamorphosen, together with the Munich literary magazine The Principle of the Most Economical Explanation, launched the "Super Prize for Literature". This was awarded to the authors Martin Piekar , Andreas Reichelsdorfer and Felix Schiller in June 2016 . At the end of April 2017, a special edition of the metamorphosen on so-called Alternative Literature was published . The guest editor of the edition is the writer Marc Degens .