The term mise en abyme [ mi: z‿ɑ̃n‿abim ] ( old French abyme ; from ancient Greek ἄβυσσος abyssos "without a bottom, groundless, infinite") comes from heraldry and originally denotes a picture within a picture, hence an image that is itself contains.

In addition, it is used in epic and drama for a narrative method that corresponds to mathematical recursion . This use goes back to a diary entry by André Gide (summer 1893): “I like it very much when the subject of a work of art is implemented again in the spectrum of its characters - similar to the process of depicting a coat of arms in its field again ( mettre en abyme ). " 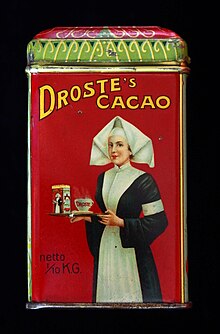 Popular picture examples are the labels on the cheese boxes from La vache qui rit or the historical advertising posters for the Dutch Droste cocoa. Derived from the cocoa packaging, the mise en abyme is also known colloquially as the Droste effect .

The mise en abyme is an illustrative or narrative method that was used in the vanitas depictions of the 16th and 17th centuries. It occurs frequently in the mid-20th century and is later used by many romantics (see also Metalepse ). It indicates the lifelessness of the representation and the lack of what is represented. This is a challenge to the reader or viewer's imagination.

In the following, various definitions or paraphrases of the mise en abyme are presented:

“Mise en abyme: (…), a term introduced by A. Gide (Journal, 1893; Les faux-monnayeurs , 1925) for a technique of frame narration corresponding to play in the play of drama , in which a or the framed internal narrative is self-reflexively reflected is the main (frame) plot or a part of it and can continue this indefinitely as if standing between two mirrors. "

The mise en abyme is therefore a specific repetition process on the narrative level, or on the discours level .

- Werner Wolf : Aesthetic illusion and the breaking of illusions in storytelling, 1993

Wolf specifies variation and symmetry as further repetition methods. The prerequisite for the mise en abyme is that the repetition is constituted on a different level than that originally given. There must therefore be a hierarchy of narrative levels (extra, intra- diegetic, etc.) in the text .

Werner Wolf also treats the mise en abyme in his book as an illusion-disrupting narrative method. But according to him it is by no means disruptive in itself. For him, it does not have to be a literal repetition, but a corresponding one is sufficient. Then the mise en abyme could not only be plausible and compatible with illusions, but also become an aid to understanding for the reader. Although it throws into the abyss, it can bring light into the darkness, solve riddles of the frame story in detective style in the internal story. In particular, reflections of histoire elements ( mise en abyme fictionelle ) are often illusion- compatible , namely when they appear as a dream, oracle or the like. Additional factors are necessary to disturb the illusion. One of these factors is, for example, the frequency of occurrence of mise en abyme and the number of levels of reflection. Another factor is the extent of the reflection content: individual elements of the story in partial mises en abyme are less disruptive to illusion than extensive and, in extreme cases, the entire history of total reflection.

In general, however, a mise en abyme disturbs illusions simply because - as Wolf says - it makes the constructed nature of the story visible. The repetition of the mise en abyme , even if only analogous, reveals a formal organization of striking artificiality.

Many of the definitions given insist on an infinity of repetition, i.e. on infinite reflection. Michael Scheffel clearly distinguishes between simple and infinite reflection. It is directed against an inflationary use of the mise-en-abyme term. Accordingly, for him only the literal repetition of the framework in the internal history can be described as mise en abyme . Often associated with this is the motif of the book in the book: for example a character reading its own story or a book repeating elements of the frame narration. Often the characters within such a construction are writers who are understood as both narrated and narrative characters.

As an example he cites Novalis ' Heinrich von Ofterdingen : In the fifth chapter Heinrich finds a book with a hermit which - as Heinrich can only deduce from the illustrations of the text written in a foreign language - obviously tells its own story. (This refers to Goethe's Wilhelm Meister years of apprenticeship . Towards the end of the novel, Wilhelm Meister receives the apprenticeship letter from the Tower Society, which contains the history of his becoming.)

A relatively new definition in the Metzler Lexikon literary and cultural theory , which also comes from Werner Wolf, defines the term mise en abyme very broadly and allows typological differentiations of the mise en abyme . A distinction is made there between the mise en abyme :