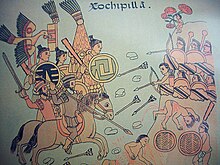 The Mixtón War was a military conflict between several Indian tribes from New Galicia and the army of the Spanish colonial power in New Spain . Several indigenous peoples who had already been subjugated by the Spaniards rose up against the Spaniards during this conflict. The name Mixtón war is derived from a bulwark of the rebels on a hill called Mixtón in the south of today's state of Zacatecas .

In 1529 Nuño Beltrán de Guzmán invaded the territory of the New Spanish province of New Galicia with 500 Spaniards and about 10,000 Indian allies, Aztecs and Tlaxcalteks . On his march, Nuño Beltrán de Guzmán conquered Nayarit , Jalisco , Durango , Sinaloa and Zacatecas , although the people of these areas had already been defeated by other Spaniards. He ignored the rights of the first explorers and conquerors and made himself lord of the land. Several thousand indigenous people were tortured or killed by Spanish troops and their Indian allies in this war. As soon as Guzmán had consolidated his conquests, he ordered the distribution of all defeated Indians to the Spanish encomiendas , thus making them de facto slaves . His reign of terror ended in 1536 when the viceroy Antonio de Mendoza had Nuño Beltrán de Guzmán arrested for his crimes and brought to Spain in chains on January 30, 1538. There he died in 1544 as a prisoner in the castle of Torrejón.

But even after his fall in 1536, many of his favorites continued to abuse the subjugated Indians. Hatred of the Spaniards eventually sparked the uprising.

Codex Telleriano-Remensis, The contemporary representation shows the death of (crowned) Pedro de Alvarado in the Mixtón War (the man on the left behind the priest)

The opportunity for revolt came when the province's new governor , Francisco Vásquez de Coronado , set out north in February 1540. In search of the seven golden cities of Cibola , he took a large number of the able-bodied Spanish men with him. In doing so, he bared large parts of the province from troops. Only a few weeks after Coronado's departure, the uprising began in the Tepic area in the spring of 1540 . The Indians rose up against slavery, Spanish rule and against the Christian religion. They killed missionaries and began to fortify their settlements. The leaders of the rebellion were Petacal , chief of the Caxcanes (Jalpa), and Tenamaxtle , brother of the ruler of Nochistlán.

The rebellion soon spread to other regions such as Teocaltiche , Nochistlán and Juchipila . There were clashes between the Caxcan and the Spaniards, but also riots by the Indians on the estates of their Spanish masters. The conflict threatened the Spanish dominance in Mexico . Faced with this emergency, the Viceroy, Antonio de Mendoza, sent Cristóbal de Oñate to put down the rebellion in New Galicia. But Oñate was defeated by the insurgents. On June 12, 1541, Pedro de Alvarado arrived with reinforcements. He restored order in Guadalajara and then turned to Nochistlán. There he was wounded in the leg during a battle. On July 4, 1541 Pedro de Alvarado died of this injury without being able to completely suppress the uprising beforehand.

The suppression of the uprising

The unsuccessfulness of the Spanish army and the fear of an expansion of the uprisings to Michoacán and then all of Mexico prompted Viceroy Antonio de Mendoza in September 1541 to personally lead the troops against the rebels. With 450 Spaniards and 30,000 Aztecs and Tlaxcalteks he marched into the province and gradually stifled the uprising. The Mixtón mountain fortress was not captured by the Spanish until 1542.

Thousands of Indian men were sent as prisoners in chains in the silver mines . Many women and children were abducted from their homeland and had to work on the Spanish haciendas .

Despite the defeat of the Caxcan in Mixtón, some other places remained under Indian control for some time. In this respect, the uprisings did not end everywhere even after the fall of Mixtón. There were repeated skirmishes that culminated in the border war against the Chichimecs in 1550 .

The memory of the Mixtón War stayed alive among the indigenous people of Mexico to this day.