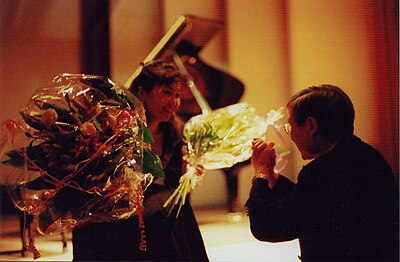 Mungo Janshindulam in the Konzerthaus am Gendarmenmarkt, Berlin 2001

Mungonzazal Janshindulam ( Mongolian Янжиндулмын Мөнгөнцацал , Jandschindulamyn Möngöntsatsal ), also known as Mungo (born November 28, 1972 in Ulaanbaatar ; † November 7, 2007 in Berlin ) was a Mongolian pianist and music teacher . She was the first female pianist from Mongolia to become known in Europe for her unusual way of playing, and she has won multiple prizes at international piano competitions and concerts. Until her death she lived and taught in Düsseldorf and Dortmund .

In her early teens, Mungo showed a great interest in music, especially the piano. When she was 8 years old, her mother took her to the Music-Choreographic School in Ulaanbaatar to promote her. As a piano student, she began taking part in important piano concerts in Mongolia in the music theater and in the State Opera in Ulaanbaatar. In addition to playing the piano, she got very good grades in math and Russian lessons. She graduated from the School of Music and Choreography with distinction. For her above-average academic performance, she was awarded the XII in 1985. World Festival of Youth and Students sent to Moscow. Three years later, at the age of sixteen, Mungo was invited to study piano at the Moscow Gnessin Institute .

In 1993 she moved from the Moscow Gnessin Institute to Richard Braun in Germany at the Hochschule für Musik in Detmold , Dortmund department, which she successfully completed in 1997. In the same year she continued her music studies at the Hochschule für Musik in Münster near Weichert, where she graduated in 2000 with distinction. At the same time, she began teaching Schmidt as a teaching assistant in a singing class at the University of Music in Dortmund. In addition, she took master classes outside of Germany: in Japan , Spain and in many other European countries.

In October 1996 she was the first ever Mongolian pianist to receive a first prize at the 9th chamber music competition “Rassegna Internationale Pescara Musica” in Pescara / Italy. In the following years, too, her high level of playing ability was praised in the press. Her career highlights include numerous solo concerts and as a song accompanist, her appearances in 1999 and 2001 in the Konzerthaus am Gendarmenmarkt in Berlin. In 2006 she gave her last performance in this concert hall, where she performed with TrioMusarto .

1999–2003 she was a teaching assistant at the Musikhochschule in Dortmund and as a song accompanist in the Madrigal Choir of the University of Münster. Since 1999 she has worked as a piano teacher and music pedagogue at the private institute for musical education (IMB) in Dortmund. In 2002–2005 she continued her concert exam at the Detmold University of Music. In 2002 Mungozazal Janshindulam was co-founder of the " Trio MusArto ", to which she herself gave the name.

In honor of the pianist Mungo, the “Mungonzazal Piano Foundation” was set up by her family and relatives in Mongolia in spring 2008. In addition to general charitable purposes, this foundation also supports the musical education of children and young people with the appropriate talent.

On November 28th every other year, on the pianist's birthday, the foundation organizes the “Mungonzazal Chamber Music Competition”, which was held for the first time in Mongolia. In 2008 over 50 Mongolian music students took part. In this competition, 9 students won the prize with certificates for first, second and third places. After the successful completion of the chamber music competition, the winners and participants gave a gala concert in Ulaanbaatar in honor of Mongoose. The course of the competition and the concert were broadcast nationwide on radio and television.