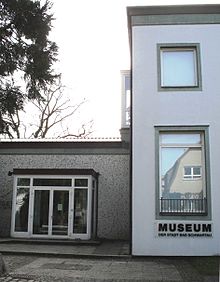 Since the museum opened in 1989 until it was temporarily closed in 2018, the permanent exhibition has focused on:

In addition to the permanent exhibition, various special exhibitions were shown.

Viktor Kaczkowski directed the museum from 1989 to 2018. He had been working for the city of Bad Schwartau since 1985 and built the museum. Judith Ohrtmann took over the management of the museum in December 2018.

The Museum of the City of Bad Schwartau is currently undergoing extensive restructuring, which includes both a new conception and a change of location. For this purpose, the museum was temporarily closed to visitors. No date has yet been set for the reopening.

In front of the museum there is a 20 meter high giant sequoia tree , which has been protected as a natural monument since November 17, 1992 (see list of natural monuments in Bad Schwartau , No. 22).

Commons : Museum of the City of Bad Schwartau  - Collection of pictures, videos and audio files