The nature reserve in the valley of the Dürren Liesing is located north of the Parapluieberges in a former quarry area, which was not backfilled after the end of mining, but has been able to develop naturally since the 1980s. Since 2013, it has largely belonged to the municipality of Kaltenleutzüge. However, the landowner of the nature reserve is still the market town of Perchtoldsdorf. Together with the Teufelstein nature reserve that has existed for decades, the new nature reserve "Teufelstein - Fischerwiesen" was created in 2016.

Quarry and lake on the northern slope of the Teufelstein mountain

The area consisted of limestone and marl and was mined from 1905 to around 1980 by a large quarry . Was in the cement plant from the rock Wien-Rodaun the Lafarge Perlmooser cement produced. The northern slope of the Teufelstein Mountain is largely no longer there today. During the operation of the quarry, groundwater entering the fishing meadows was pumped out. In front of the quarry, there were extensive meadows here, which housed an unusual variety, from dry grass to semi-dry grass to wet meadows and spring outlets.

Above the quarry was the only 0.98 hectare “Teufelstein nature reserve”, which was decreed in 1936. The reason for the protection was the occurrence of rare plants.

When the quarry was closed in the 1980s, a 23-meter deep groundwater lake was created, which is surrounded on three sides by rocky steep banks - the "quarry lake".

In 2016, the nature reserve was significantly enlarged: since then it has also included the area of ​​the former Fischerwiesen quarry including the lake that was created there. The name of the nature reserve was changed to "Teufelstein-Fischerwiesen", its new area is about 46 hectares. The motive for protection is that the area is one of the most biodiverse z. B. wild bees, amphibians and reptiles throughout the Vienna Woods and should be preserved as a valuable "second-hand habitat".

A special feature is the close juxtaposition of bodies of water, wetlands and very dry, heat-favored habitats in the area. The “Fischerwiesen” quarry is the most species-rich amphibian and reptile habitat in the Vienna Woods and the entire Vienna area. As a substitute habitat for these generally endangered and protected species, it is of the highest nature conservation value. The quarry is also an extremely important habitat that is worth protecting for rare bird species such as the eagle owl and many special insect species.

In addition to the two-hectare, 23-meter-deep, year-round water-bearing “quarry lake”, there are numerous pools and ditches. Most are only flooded in winter and spring or after heavy rain and often dry out in summer. These are home to numerous rare animals and plants that love from drought to moisture, which today are in massive distress due to backfilling and draining of wetlands, filling ponds and paintwork, the destruction of "Gstettn", forest cover, the stocking of small bodies of water with fish and much more . Due to the special location, there are species of the cooler, more humid Vienna Woods such as grass snakes , common frogs and yellow-bellied toad as well as particularly warm species from the Pannonian thermal line and the plain of the Vienna basin.

Open bank areas with missing or sparse vegetation and good solar radiation are of great importance for the larval development of the yellow-bellied toad and tree frog . In small, sunny, very shallow and summer-drying small bodies of water - even in the "Gatsch-Lacken" on unpaved roads - enemies of amphibian larvae such as dragonfly larvae or fish cannot survive. For amphibians, on the other hand, the advantage of the lack of predators predominates in most years, because many tadpoles have developed completely due to the warming sun by the beginning of summer, even before the waters dry out.

Dragonfly species that live in and around standing water benefit from artificially created lakes and ponds in quarries, gravel and sand pits and would be much rarer today without them. Due to the large abundance of insects in the quarry, it is also an important hunting area for bats .

Since only the northeastern shore of the quarry lake offers shallow water areas overgrown with plants, it is important for many animals that the aquatic plants are not destroyed by illegal bathing and walking on the shoreline and shallow water areas. 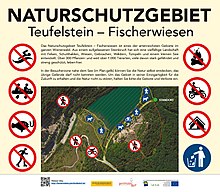 In order to give the protective measures an even stronger legal basis, the Perchtoldsdorf council decided unanimously in September 2015 to apply for protection of the area as a nature reserve, which was decreed by the state of Lower Austria in June 2016.

Since then, based on the example of other nearby protected areas, extensive public and educational work has provided information about the value and protection of the area. Current usage problems should be improved. At the same time, supervisory bodies work with the police to check compliance with the rules in the nature reserve and report any violations. A human-made natural area of ​​outstanding ecological importance can thus also be preserved for the future.

With the market town of Perchtoldsdorf as the landowner, biologists and ecologists developed a concept for the sustainable protection of the valuable natural area “Fischerwiesen” and its implementation was approved by the nature conservation authority. The top priority for the preservation of the area is the guiding of visitors, the containment of further bush and forest cover and the consistent control of neophytes in order to prevent their further spread.

Despite the relatively undisturbed development for decades, the area has been exposed to new threats in recent years.

The increasing illegal use of swimming at Steinbruchsee - combined with fire pits, garbage and faeces spread across the area - is increasingly disturbing previously quiet areas.

Increasing scrub and forest cover reduce the amount of sunlight that is important for amphibians and reptiles. Neophytes spread and endanger the variety of flowers. The black locust was once planted for recultivation. It shoots runners and, with the help of bacteria in the roots, binds nitrogen from the air. As a result, over time, colorful blooming meadows turn into low-species robinia thickets with nettles in the undergrowth.

Goldenrod and knotweed were probably brought in with excavated earth. The goldenrods spread strongly on the east bank of the "Steinbruchsee" and on some small bodies of water. With their root runners they can displace all other plants over time. This is a problem for flower-visiting insects because the goldenrod is relatively short and only flowers in late summer. This means that many insects can hardly find any food in the period from April to July / August.

The bank vegetation on the eastern shore of the lake is currently severely degraded. This can also be seen from the ground beetle fauna examined in 2015. Moisture-loving, more undemanding species such as the yellow blotch beetle can be found, but there are currently no typical, more demanding bank dwellers that would be expected due to their habitat.

Bathing dogs in the pools stirs up mud and destroys amphibian spawns. Arbors ( bleak ) as well as the goldfish and American yellow-cheeked tortoises living in the outflow of the lake were unfortunately released here by "nature lovers". This threatens many other aquatic animals and the water quality. In earlier times - before humans released fish in almost every body of water - smaller bodies of water were mostly fish-free. Plankton, which are important for water quality - small animals and algae - develop completely differently without fish than in bodies of water with fish. Even aquatic animals living on the bottom, which clean the water by breaking down dead plants and animals, can be decimated by fish, which in turn has a negative effect on the water quality. Especially carp species such as goldfish and koi contribute greatly to the deterioration of the water quality through burrowing activity.