Legal status of cannabis use in Canada

Possession, acquisition and use of cannabis is a legal act in Canada for persons aged 19 and over , provided that the amount carried outside of their own home does not exceed 30 grams. The trade takes place via state-licensed delivery points.

Logo of the Marijuana Party of Canada (2008)

The use of cannabis was banned in Canada in 1923. In 2000, the Marijuana Party of Canada was formed in Montreal , but it never entered parliament. The use of cannabis and cannabinoids as medicines was legalized in 2001. In June 2018, the Senate decided to legalize cannabis as an intoxicant for people aged 19 and over. The corresponding law came into force on October 17, 2018. Since then, all adults aged 19 and over have been allowed to carry up to 30 grams of cannabis in public. 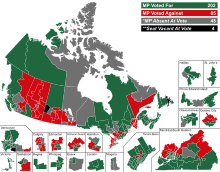 Legalization as a recreational drug 2018

In the 2015 Canadian general election , legalizing cannabis as a narcotic was a key campaign promise made by Justin Trudeau , chairman of the Liberal Party of Canada . After his election victory, he initiated a law that should legalize the cultivation, sale and consumption of cannabis from summer 2018. A corresponding draft law (Cannabis Act, Bill C-45) was referred by the House of Commons to the Senate at the end of November 2017 , which discussed it on March 22, 2018 and approved the draft after several changes on June 7, 2018. The draft came back to the House of Commons, which voted for it, but did not accept all the changes made by the Senate and therefore referred it again to the Senate. This finally accepted the bill on June 19, 2018 with 52 to 29 votes, thereby legalizing cannabis in Canada. The law came into force on October 17, 2018. Due to the enormous interest of buyers, there were sometimes delivery bottlenecks at the delivery point.

A jar of Quebec cannabis

It is sold through state-licensed producers and distribution points. When legalization began, there were 132 licensed marijuana producers in Canada, with a total of 69 producers based in the province of Ontario. Around half of these companies are listed. Cannabis can also be obtained via the Internet . A government website there can also be used to check whether a dealer is licensed. The licenses required for sales are issued by the respective provincial governments. A price of ten dollars (about seven euros) per gram of cannabis was envisaged to start trading . This included a one dollar tax.

The use of cannabis in Canada is still subject to some restrictions. It is required that citizens are at least 19 years old to legally handle cannabis. Only in the province of Alberta is 18 years of age sufficient. In addition, the amount that people outside of their home can take with them is limited to 30 grams. As a rule, cannabis can be consumed wherever smoking tobacco products is permitted. Public buildings, trains, buses or playgrounds are therefore taboo. In six of the thirteen provinces, however, cannabis use is only permitted in private and not in public. Home growing of marijuana is allowed in eleven provinces (limited to four plants per household). Doing business on the black market with unlicensed dealers and driving under the influence of drugs are still prohibited.

As of 2020, the minimum age to legally use cannabis in Quebec has been 21 years.

Members of the Canadian Armed Forces are also allowed to use cannabis, but must stop 8 hours before the start of duty. For members of the military who drive vehicles or carry weapons, it is 24 hours. During maneuvers and missions outside of Canada, consumption is not allowed.

The sale of cannabis-containing foods has also been permitted since October 17, 2019.