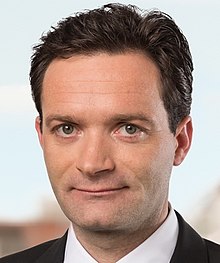 Norbert Totschnig (born June 6, 1974 in Lienz , Tyrol ) is an Austrian politician ( ÖVP ). The East Tyrolean has been director of the Austrian Farmers' Union since August 1st, 2017 .

After attending primary school in Tristach and secondary school in Lienz , Norbert Totschnig graduated from the PSF for metal processing in Lienz from 1988 to 1992. After his military service in Innsbruck, Totschnig attended the advanced course for automation technology at the HTL in Bregenz . In 2001 he completed his studies in economics in Innsbruck .

Totschnig started his career as a member of parliament for National Councilor Georg Schwarzenberger and as assistant to the member of the European Parliament Agnes Schierhuber . In May 2002, Norbert Totschnig became General Secretary of the Youth Farmers' Union, which he held until January 2007.

From 2007 to 2009 he worked at Maschinenring Austria. In February 2009 he returned to the team of the Austrian Farmers' Union , where he worked as an office manager until 2011.

Subsequently, he was responsible for ecology and agriculture and forestry in the parliamentary club of the ÖVP. In December 2013 he moved to Vice Chancellor Michael Spindelegger's cabinet at the Federal Ministry of Finance.

After Michael Spindelegger's term in office , Norbert Totschnig worked as a consultant in the cabinet of Vice Chancellor Reinhold Mitterlehner at the Federal Ministry for Science, Research and Economy in Vienna. From March 2016 to July 31, 2017 Totschnig worked as a club advisor for the environment, agriculture, forestry, food, animal welfare and human rights in the ÖVP parliamentary club in Vienna.

Norbert Totschnig has been director of the Austrian Farmers' Union since August 1st, 2017 . In this activity he follows Johannes Abentung.