Plate tectonic situation in the northeastern Mediterranean area, North Anatolian fault in yellow, arrows show the directions of movement of the Anatolian and Arabian plates relative to the Eurasian plate

Severe earthquakes, especially in the eastern Mediterranean, are a side effect of the collision between the continental blocks Africa - Arabia and northern Eurasia, which has now lasted around 50 million years (see →  Alpidian orogeny ). But unlike in many other sections of the collision zone, the lithospheric plates in northern Turkey do not slide over one another, but past one another ( transform fault ). The mean relative movement rate at the North Anatolian Fault is 23 to 25 millimeters per year, the total displacement to date is 80 to 90 kilometers. While the North Anatolian fault zone is very narrow in the east with hardly more than 10 kilometers, it becomes wider and wider towards the west and merges into a shear zone that is a few hundred kilometers wide in the area of ​​the Marmara Sea.

The North Anatolian Fault is a result of so-called extrusion or escape tectonics: As a result of the collision pressure, a continental fragment was formed, which evades the approximately north-south-directed compression to the west - the Anatolian plate (also known as the Anatolian wedge due to its shape ). The plates can not slide past one another continuously because of the high friction . Instead, mechanical tensions build up at the plate boundaries over a period of days or even decades , which suddenly discharge in the form of earthquakes, where the tension locally becomes greater than the frictional force or greater than the strength of the rock of the crustal clods that are sometimes actually interlocked along the fault is. The counterpart to the North Anatolian Fault is the East Anatolian Fault , which forms the plate boundary to the Arabian Plate.

The existence of an elongated seismic zone was recognized in the 1930s. However, at that time it was interpreted as a transition zone between Eurasia and Gondwana and called the " Paphlagonian scar". Its importance for tectonic events became clear after the Erzincan earthquake in 1939 . By dealing with this and subsequent earthquakes, İhsan Ketin recognized the fault zone as a right-handed transform fault in 1948.

The San Andreas Fault in the western United States is often used for comparison because it is also a transform fault . Although the plate tectonic situation at the San Andreas Fault is somewhat different, as it is not in a continent-continent collision zone, the North Anatolian Fault is similar in many ways. On the one hand, both faults are right-handed (right-lateral, dextral ), that is, the clod or plate located beyond the fault line from the perspective of an observer is offset to the right. In addition, they have similar dimensions, each form a veritable fault system with several side branches and both are sources of earthquakes with high magnitude . Similar to San Francisco on the San Andreas Fault, which was destroyed by a strong earthquake in 1906, the metropolis of Istanbul is also potentially at great risk from the North Anatolian Fault. 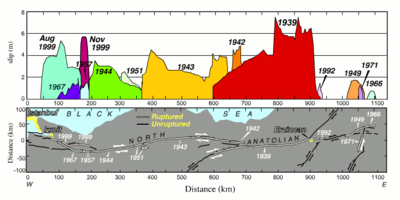 Severe earthquakes along the North Anatolian fault zone from 1939 to 1999 and amounts of the associated local movements. Note the successive westward propagation of the earthquake-affected sections of the fault and the movement maxima, which was particularly pronounced in the years 1939 to 1944.

Despite its proximity to the North Anatolian Fault (only about 20 kilometers), Istanbul was last hit by a severe earthquake in 1766 . Scientists from the GeoForschungsZentrum Potsdam, together with their Turkish colleagues from the Kandilli Observatory for Earthquake Research, calculated a probability of 60 percent for a major earthquake within the next three decades .

During the past hundred years, a series of severe earthquakes, the epicentres of which moved westward over time, indicated that a major earthquake was imminent in Istanbul .

The above-mentioned quake near İzmit , only 80 kilometers east of Istanbul, was an additional warning signal. A large fault cannot move along its entire length at the same time, because the frictional resistance is far too great for that. Instead, the earth tears in sections - in the case of the İzmit quake over a length of 130 kilometers. This not only relieves the accumulated tension on site, but also a concentration of tension at the end of the active part of the fault . Years or decades later, the next earthquake will be triggered there. Earthquake researchers are busy in Istanbul and try to prepare as best as possible for the impending earthquake. In order to be able to better understand the individual processes geologically, they built stations around the Sea of ​​Marmara and also researched the bottom of the sea. It is true that it is not possible to warn the population in good time, but automatic systems are now being installed that are supposed to close gas pipes in the event of an earthquake, turn bridge lights to red or stop trains.

In 2013, after four years of measurements, a 30-kilometer-long stress zone was discovered less than 20 kilometers away from Istanbul.