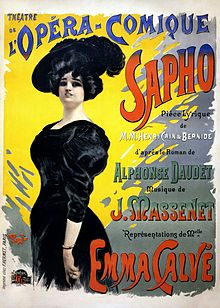 The second Salle Favart from 1840

The Opéra-Comique is a theater in Paris . It stands on Place Boieldieu , near the Boulevard des Italiens in the 2nd arrondissement, and is also known as Salle Favart .

The institution, the building and the genre of the opéra-comique must be kept apart: according to the Parisian tradition, the theater names do not refer to houses, but to institutions that can change their location. The name Opéra-Comique goes back to a merger of two troops from the Parisian fair theater under Catherine Baron and Gautier de Saint-Edme around 1714. They performed operatic parodies and pantomimes . From this time on, the opera genre called Opéra-comique developed .

After the turmoil of the revolution, the Théâtre national de l'Opéra-Comique was founded here around 1792 . 1802-1804 and 1815-1818 the Salle Favart was rented to visiting Italian troops and called Théâtre-Italien . In 1817 the operas of Gioachino Rossini celebrated their triumphal entry. 1820-21 the house of the Paris Opera served as a venue. From 1825–38 the house again became an institution Théâtre-Italien , but also offered German and English opera troupes the opportunity to make guest appearances. On January 13th or 14th, 1838 the hall was destroyed by a fire in which 4 people were killed.

Aubers Fra Diavolo (1830) is one of the most successful premieres of this time.

The first Salle Favart burned down in 1838 and was replaced by a second building with around 1500 seats in 1840. Here came Georges Bizet's opera Carmen in 1875 and Jacques Offenbach's Tales of Hoffmann premiered. This house also burned down in 1887, killing 84-131 people.

The opéra-comique as a genre was developed by composers such as Adolphe Adam , Daniel-François-Esprit Auber , François-Adrien Boieldieu , Ferdinand Hérold , Victor Massé , Jules Massenet , Ambroise Thomas . The majority of these works were performed by the institution of the Opéra-Comique in the Salle Favart . Other composers who performed their works in less upscale theaters, even if they belonged to the genre of opéra-comique in the broader sense , such as Jacques Offenbach , were largely denied this framework.

The grand current building of the Opéra-Comique , the third Salle Favart , dates from 1898, where Claude Debussy's Pelléas et Mélisande (1902) premiered. Many novel operas such as Gustave Charpentier's Louise (1900) or Maurice Ravel's L'Heure espagnole (1911) could be produced here.

After financial difficulties, the Opéra-Comique and the Théatre National de l'Opéra were merged in 1936. In the 1970s, the building was used to train stage artists and eventually became a venue for the Opéra .

In 1990 the Opéra-Comique regained its autonomy. The house holds on to its tradition as a patron to this day and regularly commissions the composition of modern operas, which are then performed there. In 2005 the Opéra-Comique received the status of a Théâtre national .