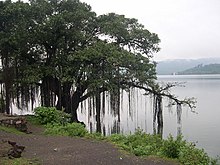 Banyan trees at the Khadakwasla Dam

The two dams Panshet and Khadakwasla in the Indian state of Maharashtra became famous in 1961 through a dam disaster .

Khadakwasla lies below the confluence of the Ambi in the Mutha (which flows over the Mula-Mutha into the Bhima ); that is, the water from the Panshet Dam flows into the Khadakwasla Reservoir. The Khadakwasla Dam is located about 20 km southwest of Pune, which is 192 km (by rail) and 160 km (by road) from Mumbai (Bombay) at 559 m asl. 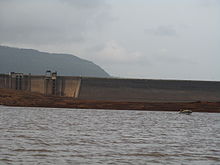 On July 12, 1961 , the Panshet Dam broke due to structural failure of the structure during the first flood event. The bottom outlet was damaged by cavitation and collapsed. The earth dam was then washed away. The resulting tidal wave reached the fully filled Khadakwasla reservoir, which was flooded 3 m, so that it also broke as a result of the flooding (a so-called cascade rupture ). The tsunami destroyed large parts of Pune's old town, killing 1,000 to 2,000 people.

The dams were rebuilt and still supply Pune with water today. Today they are also used for recreational purposes. There are various attractions such as Peacock Bay, the village of Kudje, and Neelkanteshwar by the village of Bahuli.

There is also a Panchet Dam in eastern India on the Damodar River .