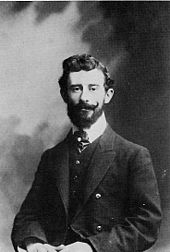 Pavane pour une infante défunte ( Pavane for a dead princess ) is a six-minute impressionistic piano piece by the French composer Maurice Ravel . The composition was created in 1899 while studying under Gabriel Fauré at the Conservatoire de Paris , making it one of his early works. The piece is dedicated to his patron Winnaretta Singer , the “Princess of Polignac”, who ran a glamorous Parisian salon where Ravel often stopped off during his student days. In 1910, over a decade later, Ravel published another version of the piece for orchestra.

Ravel himself described the piece as "a memory of a pavane that a little princess could have danced at the Spanish court in ancient times"; it is "not a mourning suit for a dead child, but an idea of ​​a pavane, as it might have been danced by such a little princess in a painting by Velázquez". However, he later stated that he had chosen the title because of its assonance . In any case, like some of Ravel's other compositions, the title evokes the Spanish court of the 16th century and is to be seen in connection with the nostalgia for Spain of the 19th century.

The piece was first performed publicly on April 5, 1902 by Ravel's close friend Ricardo Viñes . The hitherto neglected piece was received very positively by contemporary critics and was therefore extremely popular; if his music was considered too "anarchistic" at the time the piece was first published, it now established his international success as a composer. According to his own statement, Ravel himself valued it rather less than his other pieces due to the overly strong appeal to the music of Emmanuel Chabrier .

Ravel leaves the conception of the subject to the horn. He demands "2 Cors simples en sol", that is, two natural horns in G, which is unusual for that time. However, this can be explained by the special position of the Conservatoire de Paris , where only natural horn was taught until 1903 . The lightness in construction and sound as well as the sound characteristics of the muffled and muffled tones of the natural horns were very popular up to that time and very suitable for this worn piece.

The composer intended a very slow implementation of the piece, which should underline the dignity and deliberation of the composition and which he also implemented in his own performances , to the displeasure of critics such as Émile Vuillermoz . The ostensibly catchy melody of the work stands in contrast to the novel and perfectly crafted harmony, whose chord palette ranges from three to seven notes . The composition therefore exemplifies what Stuckenschmidt described as “learned naivety”, as the “differentiated and refined nursery” of Ravel.

The first recording of the Pavane was made in Paris in 1921. A recording made in 1932 was often attributed to Ravel himself as conductor, but the orchestra was directed by Pedro de Freitas-Branco, and Ravel was present at rehearsals and recording.

Ravel himself recorded the piece on a piano roll in 1922. The recording lasts 5 minutes 40 seconds.