Peg Woffington (born in Dublin in the 18th century , † March 28, 1760 in Queen Square, Westminster ) was an Irish actress. She was temporarily identified with Dublin's landmark Molly Malone .

Margaret Woffington, who later called herself Peg, was probably born between 1714 and 1720 as the daughter of a bricklayer and a laundress. When the girl was ten years old, she was discovered by Mme. Violante, who ran a theater called Lilliputians on George's Lane in Dublin . In this theater children played adult roles in adult plays; Peg Woffington performed Polly Peachum in John Gays Beggar’s Opera . When Mme. Violantes Theater was closed due to a scandal, the young actress had already switched to the Smock Alley Theater, where she played, among others, Cordelia in William Shakespeare's King Lear , Ophelia and Juliet. However, she had particular success, among other things because of her smoky voice, which Francis Gentleman compared to that of a croaking owl, in pants roles , for example as Harry Wildair in George Farquhar's The Constant Couple . Eventually she was engaged at the Covent Garden Theater in London in the early 1840s . Domenico Angelo , with whom she was dating at the time, opened a fencing school in the metropolis. Peg Woffington was also very successful in London and had numerous admirers, including one of the love affairs of King George II . She allegedly resolved financial difficulties by working as a prostitute in a corresponding house of a woman named Jane Douglas. Eventually she moved to the Drury Lane stage , where she appeared on stage with David Garrick . At times she lived in a three-way relationship with Garrick and Charles Macklin before the famous actor turned to the dancer Eva Maria Veigel (stage name: Violetta ), whom he married in 1749. From 1750 to 1754 Peg Woffington played at the Smock in Dublin, which was directed by Thomas Sheridan . She was the first woman to join the Beefsteak Club . A return to the Covent Garden Theater planned as a triumph did not turn out entirely as expected: There she had grown up a competitor in George Anne Bellamy , with whom she got into a violent battle on the open stage in 1756. In a quarrel between Statira and Roxana in The Rival Queens by Nathaniel Lee , Peg stabbed her rival with the theater dagger and injured her.

A year later, on May 27, 1757, she suffered a stroke , also on the stage . When Rosalinde in As You Like It was hit by the event in the last sentence of the epilogue, she was able to drag herself behind the scenes and passed out there. She remained paralyzed on one side for the rest of her life. She donated almost all of her fortune to charitable institutions. 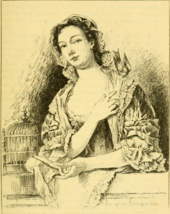 John Lewis , who worked as a set painter at the Smock Abbey Theater, painted a portrait of the actress when he was 17. The National Portrait Gallery owns around 20 depictions of Woffington.

Charles Reade wrote a book called Peg Woffington in 1852 , which was made into a film in 1910 with Florence Turner in the lead role.