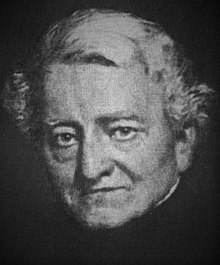 Beising attended elementary and Latin schools in Elberfeld. He then went to a grammar school in Cologne , where he passed his school leaving examination in 1825. He then studied at the Rheinische Friedrich-Wilhelms-Universität in Bonn. In 1827/1828 he moved to the Eberhard Karls University in Tübingen and completed his theology studies there. Beising did his doctorate at the Justus Liebig University in Gießen and received the philosophical doctorate with his dissertation The education of the human being is everywhere conditioned by the conditions of space and time . On April 14, 1830, he was ordained a priest in Cologne. Two years later he was appointed pastor in Wermelskirchen . On December 14, 1846, he applied to the parish of St. Gertrud (today's market church ) in Essen, where he started working on March 1, 1847.

Beising campaigned for the construction of the St. Gertrud Church in Essen. This was followed by his support for the establishment of the Herz-Jesu-Kirche in Altenessen- Süd, the Marienkirche in Segeroth and other churches.

After several positions as a clergyman, he founded today's Franz Sales House in Essen- Huttrop . In addition, from 1862 to 1874 he was district school inspector of the elementary schools of the city and district of Essen . Until his death, Beising was a member of the board of directors of the association founded in 1884 for the upbringing and care of catholic feeble-minded children in the Rhine Province .

Beising was buried in the cemetery at Kettwiger Tor . Mayor Erich Zweigert , the town councilors, delegations from town authorities, representatives of the Protestant presbytery, the synagogue community and the industrialist Friedrich Alfred Krupp attended his funeral service . After the cemetery at Kettwiger Tor was closed in 1955, the grave site was transferred to grave field 5 on the Ostfriedhof in Essen .

In Essen, Beisingstrasse and Peterstrasse in the north quarter , the Beising School and the Peter Beising House, in which the general association of the city's Catholic parishes has its seat, bear his name.