Pharmacy Museum of the University of Basel

Pharmacy Museum Basel; View of the inner courtyard. On the right in the picture the house »Zum Stuhl«

View into the Totengässlein; in the center of the picture the house "Zum Stuhl" with the entrance to the Pharmacy Museum

The Pharmacy Museum of the University of Basel (previously the Pharmaceutical History Museum of the University of Basel, originally a collection for the historical pharmacy sector ) shows in its permanent exhibition the history of medicines and their manufacture. The museum was founded in 1924 by Josef Anton Häfliger (1873–1954) as a university study and specimen collection and has been preserved in its original form as a scientific cabinet to this day.

The museum houses one of the world's largest and most important collections of pharmaceutical historical objects. One finds there pharmacist ceramics , all pharmacies Mobiliare, an alchemist - laboratory , mortar , first-aid kits, books, medicines from previous days and all had to do with the production of drugs.

In the middle of Basel 's Old Town, between Market Square and St. Peter's Church , the house is "to Middle armchair". Mentioned for the first time as the “Unter Krämern” bathing room as early as 1316, the house has become a place of eventful history. From 1480 the printer Johannes Amerbach , the progenitor of the famous family of scholars, lived here . In 1507 the house was taken over by Johannes Frobenius , probably the most famous book printer of his time. Erasmus of Rotterdam found a hospitable place to live and work at Froben from 1514 to 1516.

Famous illustrators such as Hans Holbein the Younger and his brother Ambrosius , as well as the form cutter Urs Graf joined the printers . In 1526 and 1527 the family doctor Frobens who had recently arrived, the doctor Theophrastus von Hohenheim, who is still famous today and who called himself Paracelsus , worked here.

The Pharmacy Museum of the University of Basel has been located in the "Zum Stuhl" building since 1925. The aim of the museum is to showcase the history of pharmacy in its scientific, art-historical and folklore aspects.

The entrance to the Pharmacy Museum on Totengässlein

The Pharmacy Museum dates from a time when collections of material objects were still a central component of scientific teaching and research. The museum has its origins in the private collection of the pharmacist and lecturer in practical pharmacy and pharmacy history, Josef Anton Häfliger (1873–1954). In 1924 he handed over his collection of old apothecary jars, obsolete medicines, prescriptions, woodcuts, pictures and books to the university . The director of the pharmaceutical establishment founded in 1917, Heinrich Zörnig , made several rooms available for this. With the establishment of the collection in the pharmaceutical establishment, Häfliger was able to introduce the students to practical pharmacy through historical developments. The objects served as teaching aids to convey the history of pharmacy and the techniques of drug production. The collection was created in direct connection with historical developments in pharmaceutical practice. Because in the first half of the 20th century, the entire pharmaceutical industry - from research to production to the sale of pharmaceuticals - was in a profound change.

An extensive collection of previously used medicinal substances from all over the world illustrates different concepts of illness and healing concepts over time.

Among the two historical laboratories in the exhibition, the alchemist laboratory with originals from the 16th and 17th centuries testifies to the search for the philosopher's stone . In the pharmacy laboratory from around 1800, the manual processing of medicinal plants determines the work.

Three pharmacy establishments show the changing times: The richly decorated court pharmacy from Innsbruck was built around 1755. Classically, in the style of the Empire, the pharmacy is presented around 1820. The furniture of the former Basel Barfüsser pharmacy from the Time shortly before 1900. Today it serves as a museum shop and forms the entrance to the museum.

View of the museum's ceramic collection in the »Vasensaal«

The museum exhibits an important collection of pharmaceutical ceramics. The so-called faiences have been used to store raw materials and medicines in pharmacies since the 15th century.

The Pharmacy Museum is home to a scientific library. It houses literature and information on pharmacy , its related sciences and its history. In addition, information is found that was not originally intended for archiving (drug compendia, advertising brochures, price lists, etc.). The library is a reference library , i. H. no books are borrowed. Use of the library is free. The holdings can be called up via the library network catalog. 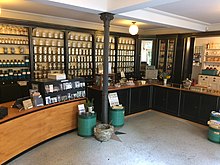 The museum shop is located in the historical furniture of the old Barfüsser pharmacy. The offer includes own tea creations, herbs, sweets, apothecary vessels, soaps and other souvenirs as well as the museum's own publications. Entry to the museum shop is free.

The museum is open Tuesday through Sunday, from 10 a.m. to 5 p.m. The museum is closed on Mondays and public holidays.

On the first Sunday of every month, a public tour of the museum is offered at 2 p.m.