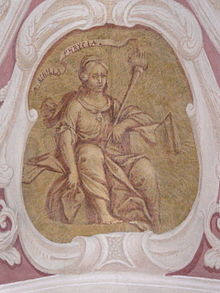 The Phrygian Sibyl is one of those named after Varro , a Roman writer of the 1st century BC. BC , ten sibyls differentiated from lactance , each provided with a geographical epithet .

Other sources from Greek and Roman antiquity contain no references to a sibyl, particularly from regions of Asia Minor, which were then understood to be part of Phrygia . Possibly the naming of a Sibylle as "Phrygian" is generally to be understood as a recognition of the long tradition of honoring a female seerhood in these regions, especially since Phrygia was known as the origin of the cult of the Earth Mother and Great Mother Cybele .

Based on lactance , the Christian Middle Ages and the Renaissance understood the Phrygian Sibyl as a pagan herald of an expectation of God, almost on a par with the prophets .

In Gothic and Renaissance art , the Phrygian Sibyl is usually depicted as one in a series of sibyls, based on Varro, often in contrast to an often equal number of prophets of the Old Testament.

Probably the best-known pictorial representations of Sibyls in the fresco on the ceiling of the Sistine Chapel do not include a Phrygian among the women. However, among numerous other representations in Sibylle Cycles, a seeress identified by name as the Phrygian Sibyl is a. a. can be seen in the following locations: