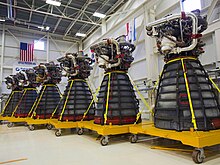 Pratt & Whitney Rocketdyne ( PWR ) was a company in the field of development and production of rocket engines in the USA . Its headquarters are in Canoga Park in Los Angeles , California .

Rocketdyne was part of North American Aviation (NAA) for a long time . The NAA merged with Rockwell International , but were sold back to Boeing in December 1996 . In February 2005 , Boeing reached an agreement to sell Rocketdyne to Pratt & Whitney . This transaction closed on August 2, 2005 .

Rocketdyne was founded by NAA in the immediate post-war period to study the German V2 rocket and adapt its propulsion system to the standards of the Society of Automotive Engineers (SAE) and to American design requirements. They used the same principle of separate combustion chambers / injectors from the V2 engine to build a much larger rocket engine for the Navaho missile project . This work had been considered unimportant in the forties and was also very poorly funded, but the beginning of the Korean War changed priorities. Navaho continued to run into new difficulties, however, and was eventually discontinued in the late 1950s when development of the Redstone missile program (essentially a much larger V-2) began. However, the Rocketdyne rocket engine, known as the A-5 or NAA75-110 , was demonstrably much more reliable than the previously developed Redstone rocket engine. The missile was then converted to the A-5 , although the resulting missile had a much shorter range. When rocket production began, the NAA hived off Rocketdyne as its own subsidiary in 1955.

Rocketdynes next big development was their first completely new design, the S-3D , which was developed in parallel with the V-2 Type-A series . The S-3 was used on the Jupiter missile , essentially an evolution of the Redstone, and was later selected for the much more powerful Thor missile . An even larger construction, the LR89 / LR105, was used on the Atlas rocket . Both Thor and Atlas had brief careers in the military but were used in various flavors for satellite launch during the 1950s and 1960s. One variant, the "Thor Delta", became the basis for the current Delta rocket series , although the Delta had almost nothing in common with the Thor since the late sixties. Although the original S-3 engine was used in some Delta variants, most of them used the refined RS-27 design, which was originally developed as a single engine to replace the Atlas triple engine.

Rocketdyne became the primary supplier to NASA's development efforts , supplying the large engines for the Saturn rocket (and potentially the Nova rocket ). Rocketdynes H-1 engine was used in the main stage of Saturn I, which essentially consists of a composite of eight Jupiters. The F-1 was the Saturn V in the first stage , while the J-II was used in the second and third stages. By 1965, Rocketdyne built the vast majority of US rocket engines and the workforce grew to 65,000. This growth seemed likely to continue into the 1970s when the contract for the space shuttle's main engine was won. But the rapid decline in both military and civilian orders led to a corresponding downsizing of the company. North American, now largely a space supplier and almost exclusively tied to the space shuttle , merged with Rockwell in 1966 to form the former North American Rockwell , which later became Rockwell International , with Rocketdyne as a main division.

As the downsizing continued in the 1980s and 1990s, Rockwell lost some of the former NAA empire. The general aviation division went first in 1980 and the Sabreliner business jet division followed in 1983 . The rest of the NAA was sold to Boeing in 1996 along with Rocketdyne. Rocketdyne was part of Boeing Integrated Defense Systems until it was sold to Pratt & Whitney on August 2, 2005 . In 2013, Rocketdyne was acquired by GenCorp and merged to become Aerojet Rocketdyne.

Some of the rocket engines developed by Rocketdyne:

Many Rocketdyne engines have been tested at Boeing's Santa Susana Field Laboratory ( SSFL ). This is located in the Santa Susana Mountain Range and the Simi Hills (northwest of Los Angeles in California and Chatsworth ). Rocketdyne, now known as Pratt & Whitney Rocketdyne, Inc. as a wholly-owned subsidiary of United Technologies Corporation , is headquartered in Canoga Park, California with offices in West Palm Beach , Florida , Huntsville, Alabama , and Kennedy Space Center , Florida and Stennis Space Center in Mississippi .

Rocketdyne operated many projects and programs at Edwards Air Force Base in Antelope Valley in the California desert near Rosamond, together with the aviation company Lockheed Martin .